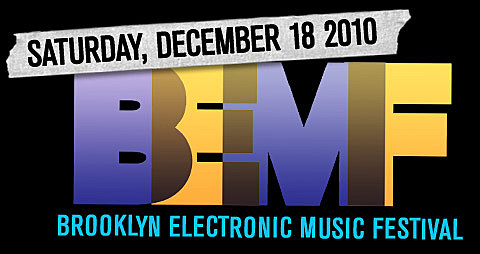 It's a little bit later this year, but the third annual The Brooklyn Electronic Music Festival will take place across two venues in Williamsburg on December 18th: Music Hall of Williamsburg and Public Assembly (if you didn't know, they are right next door to each other). The "fest" will feature acts from across the digital spectrum ("emerging and established bands, DJ's and producers from the Boroughs and beyond") including Sinden, Kid Sister, Javelin, Tittsworth, Class Actress, Brahms, Lemonade, and many others, with more to be announced.

Lemonade meanwhile is out on tour with their True Panther labelmate Delorean. Two NYC shows happen very soon and both are still on sale.

Initial BEMF lineup and two videos from last year below...