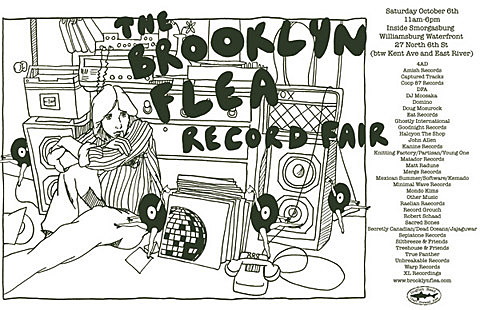 On October 6, The Brooklyn Flea's Smorgasburg in Williamsburg will move aside the uinoa falafels, huaraches, lobster rolls, and doughnuts to make room for vinyl... it's another edition of the Brooklyn Flea Record Fair. The fall incarnation will play host to 32 vendors including labels like 4AD, Captured Tracks, DFA, Merge, Mexican Summer, XL, Warp, True Panther, and many many more.

In addition, look for private collectors to be on hand to peddle their new and used wares, as well as traditional record stores like Coop 87, Other Music, Halcyon, and Mondo Kim's to set up satellite stores for the day. It all goes down from 11AM to 6PM at 27 North 6th St. (Kent Ave and East River).

More details, including a list of participating labels, are below.

With New and Used Lps for Sale from: