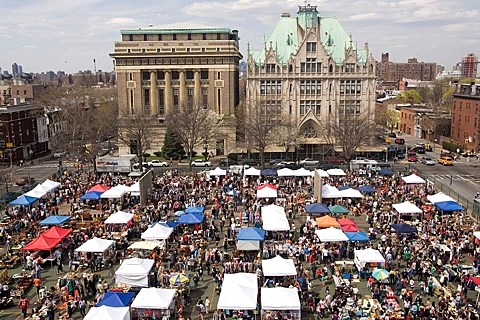 As previously mentioned, the 2015 fall Brooklyn Flea Record Fair happens Saturday, September 26 at Smorgasburg in Williamsburg. The vendors were already announced (4AD, Warp, XL, Other Music and more) and now the DJ lineup is here. It includes members of Small Black, Yumi Zouma and Lemonade, label reps from Mute, Ghostly International and Beyond Beyond Is Beyond, record store employees from Captured Tracks Shop, and a WFMU DJ. The full lineup of DJs with set times is below.

In related news, the Smorgasburg that was in Brooklyn Bridge Park is now in Prospect Park. It opened at the end of last month, and will stay there every Sunday from 11 AM to 6 PM through October 11. The new location is a spot called Breeze Hill. Via Smorgasburg's site, "Breeze Hill is just north of the LeFrak Center at Lakeside, and just off the main bike/jogging road across from the Lincoln Road entrance to the park. The closest subway is the Q to Prospect Park, but you can also walk from the F to 15th St. or the 2/3 to Grand Army Plaza."

Smorgasburg and Brooklyn Flea will also now have a winter edition at Industry City in Sunset Park. It opens the weekend of October 17 & 18, and runs every weekend through March. Here's what Brooklyn Flea says:

The gigantic market will be held in a 50,000 square-foot space overlooking the Manhattan skyline from the second floor, every weekend through March 2016, from 11:00 a.m. to 6:00 p.m. The entrance address is 241 37th Street, just two blocks from the 36th Street D/N/R subway station--only two stops from Manhattan on the D train!--and a short walk from the B35, B38 and B70 bus stops. The 39th Street exit off the Gowanus Expressway/BQE also takes you pretty much to our doorstep (and to the second-busiest Costco in America next door.)

The one in Williamsburg runs through Sunday, September 27, the day after the record fair. Record fair DJ lineup below... 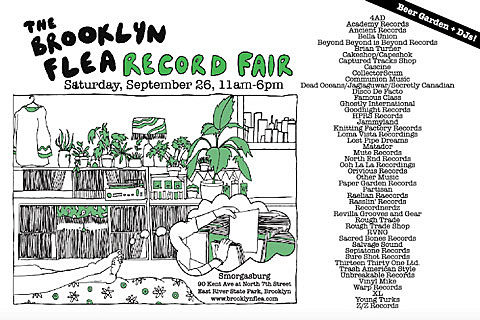