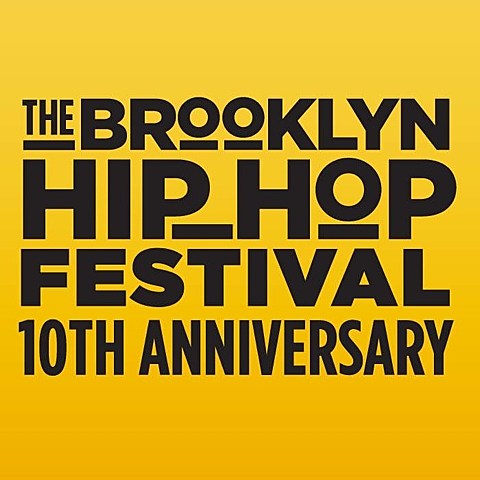 As discussed, Brooklyn Bodega's Brooklyn Hip Hop Festival returns for its 10th annual year from today (7/9) through Saturday (7/12), and more details on this year's fest have arisen since we last spoke.

The kickoff event is today (7/9) at Brooklyn Historical Society (128 Pierrepont St) from 7-9 PM with the 'Told It First Hand' discussion. The details:

This special "Told It First Hand" kicks off the 10th Annual Brooklyn Hip-Hop Festival. Festival Executive Director Wes Jackson sits down with Scott Stedman, Founder of the Northside Media Group, and Kevin Powell, activist, writer, and entrepreneur, to tackle cultural appropriation and the sometimes thorny issue of gentrification in the ever growing borough of Brooklyn. Starting at 8:15 pm, Wes Jackson will welcome hip-hop culture pioneer, Ralph McDaniels, and world-renowned turntablist and DJ, Rob Swift, to the stage to contiue the conversation and discuss important issues facing the hip-hop community.

Admission is $5 or free for BHS members. There's also a second event at 8:15 with Ralph McDaniels and Rob Swift.

UPDATE: Earlier today Brooklyn Historical Society's website listed two events, one with Pete Rock at 5 PM and another with this year's headliners at 8 PM, but it's since been changed to what it says above.

The full lineup was also announced for the main show which happens Saturday at 50 Kent. We already knew it included Raekwon, Jay Electronica and CJ Fly (of Pro Era), and it now also features Cyhi The Prynce (whose mixtape came out not long ago), plus Uncle Ralph McDaniels and Torae will be hosting, and Rob Swift will be on DJ duties. Tickets for Saturday's show are available.

More info on the rest of the fest at BK Hip Hop Fest's site.