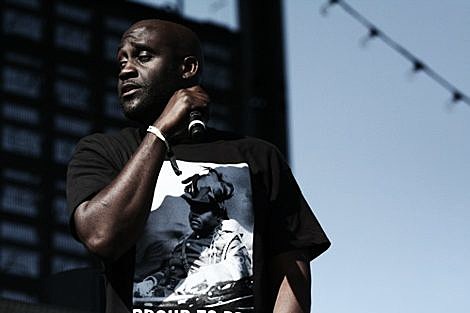 Brooklyn Hip Hop Fest 2009 was a blast (with one notable exception) and so far 2010 is turning out to be similarly interesting with the addition of the great De La Soul to headline the shindig on July 10th alongside Buckshot, Evil Dee and Smif-N-Wessun. Tickets are on sale.

The show is part of a week long celebration:

The calendar for the 6th Annual Brooklyn Hip-Hop Festival kicks off with Show & Prove on Monday, July 5th. This Hip-Hop showcase of independent and local talent is the final event of Brooklyn Bodega's three month Show & Prove competition,
Tuesday, July 6th will feature the Bodega Education Initiative, a day of panel discussions and seminars about the legendary producer, J Dilla. Speakers include Q-Tip, Ma Dukes Yancey, DJ Spinna and more.
Wednesday, July 7th is a mini Film Festival that features a variety of Hip-Hop films and a Q&A with established and burgeoning filmmakers.
Thursday, July 8th is a night dedicated to the backbone of Hip-Hop: the DJ. It will feature performances by the best DJs, from NYC to LA.
Friday, July 9th is the kick-off party to formally welcome Festival goers, past and current artists and community leaders to the 6th Annual BHF.
Saturday, July 10th is the culmination of the 2010 Festival. De La Soul, just ahead of a new album to be released this year, will headline on the DUMBO waterfront. Earlier in the day, we set it off with Family Day - a block party for families and children that celebrates the core message of Hip-Hop - social change and individual empowerment.

De La Soul recently played Coachella, are scheduled for NXNE, and recently announced that they will provide a remix for the forthcoming Here To Fall Remixes EP by Yo La Tengo!

YO LA TENGO have worked with a huge variety of artists from different genres over the years.... In 2010, the band presents an EP of remixes of "Here To Fall," the lead track from last year's "Popular Songs," by De La Soul, RJD2 and Pete Rock.
"Here To Fall" is the most popular track from "Popular Songs," a couple having a tense conversation about the future over the background of menacing, descending chords and distorted wa-wa guitar. Each of these legendary hip hop performers has taken the track and the story and made it their own.

De La and Yo La? Quite the fascinating collaboration...

Buckshot, Evil Dee, and Smif N-Wessun will be celebrating 15 years of Duck Down Records at the BHHF show, a milestone they'll also celebrate at BB King's on July 13th with the addition of Sean Price and Pharoahe Monch (who headlined the Brooklyn Hip Hop Fest last year). Tickets for that NYC show are on sale.

Duck Down also partied for their 15th down at SXSW, during which time Buckshot and Smif-N-Wessun both made appearances at our Attitude Adjustment party at Red 7.

While we're on the subject of classic hip hop artists playing NYC, Slick Rick has scheduled a show at Knitting Factory on June 13th. Tickets are on sale.

Tons of classic video below...