Q-Tip at Rock The Bells (more by Eric Townsend) 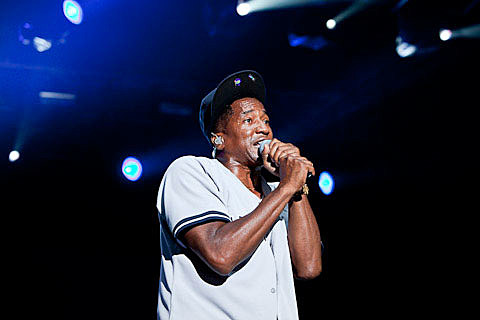 This week is devoted to hip hop and specifically Brooklyn hip hop, with the Brooklyn Hip Hop Festival ongoing and a "Salute To The DJ" event slated for TONIGHT at Music Hall of Williamsburg. Juice Crew mastermind Marley Marl will be on hand the headline the event, bringing along Grand Wizzard Theodore, Mista Sinista, Chairman Mao, Roli Rho (5th Platoon), Twilite Tone, and Getlive, all hosted by Duck Down representative Torae. Tickets are still available. We also have a pair you can win. Details and set times below.

Friday (7/15) will mean the Bodega Recognition Awards at Sheraton Brooklyn, which will "recognize and celebrate positive contributions to Hip Hop Music and Culture", but Saturday is the big celebration. Over two stages and during two events, BHHF will see performances from Lords of The Underground, Q-Tip, K-Salaam, MOP, Shad, Diamond District, Random Axe, and many more from noon until 9PM. That's split into the Family Day celebration (12 - 3) and the subsequent show at Brooklyn Bridge Park (6- 9). Full festival details are below, and tickets to the Main Stage performances are still available.

Shad's appearance is one of a few scheduled for the coming weeks, as he'll skip around the US and Canada in the coming months. Full tour schedule is below.

Though it isnt part of the BHHF, Company Flow is decidedly hip hop AND from Brooklyn. The crew plays with The Juggaknots at a sold-out Santos on Saturday.

All Brooklyn Hip Hop Festival details, Shad tour dates, and some videos below.

Brooklyn Bodega is working closely with Q-Tip to create creative programming for this year's Festival. Not just a headliner, Q-Tip will become a curator to help produce "Q-Tip & Friends," a celebration of Hip-Hop through the lense of his 20+ career. Brooklyn Bodega will be working directly with Q-Tip to mine his personal rolodex and create once-in-a-lifetime live onstage collaborations to bless Brooklyn this Summer.

This event is the culmination of the 2011 programming. Old School, New School, Funk, Soul, Local, and International artists will converge upon Brooklyn for a full day of the best Hip-Hop music our culture has to offer.

The Main Stage will feature performances by:

Hosted by Ralph McDaniels and Torae

Lords Of The Underground - Funky Child

--
TO WIN A PAIR MHOW TIX: email BVCONTESTS@HOTMAIL.COM (subject: Torae). nclude your first and last name in the email. Winners will be randomly selected and contacted ASAP. Good luck! FYI, don't worry, your name/email will not be used for any other purposes.
--