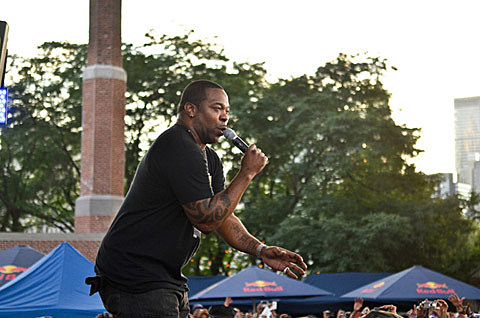 Microphone check one two: we've got some details regarding the 2012 edition of the Brooklyn Hip-Hop Festival which happens July 9 - 14 at locales all over the borough and features everything from MC and DJ battles, to tributes, industry talks and films. You can check out a the full schedule of events below.

The week-long celebration will culminate with "Busta & Friends" on July 14th at Brooklyn Bridge Park. The full lineup has yet to be announced, but will include a tribute to Adam Yauch and lots of Busta Rhymes "friends" (last year Kanye showed up). Tickets are on sale now, both to individual shows or week-long passes.

The Show & Prove Super Bowl is the 2012 Brooklyn Hip-Hop Festival (BHF) kick-off event. The culmination of the Show & Prove series, the three winners from the April, May and June Show & Prove Preliminaries will compete at the Super Bowl for an opportunity to open on the Festival's Main Day, Saturday, July 14th.

Following the Finals, we will continue the kick-off festivities with 'Hello Brooklyn' where we will invite the freshest MC's from around the country and world to rep their area code. 'Hello Brooklyn' is a part of The Festival's mission to open up and establish Brooklyn as a cultural locus point for Hip-Hop music and culture. While we are hustling here on the Planet of Brooklyn we want to make sure we take some time to support our fellow soldiers from Philly to Oslo.

One of the only events of its kind - the third year of our beloved Bodega Education initiative (BEI) is a day long symposium dedicated to critical discussion and intellectual analysis of Hip-Hop music, culture and business. BEI will highlight this year's theme - "FORTIFIED" We will spend the day at the beautiful main branch of the Brooklyn Public Library celebrating Hip-Hop's ability to endure the ups and downs of corporate mergers, label meltdown, recessions and damning critics.

Panels and topics will include:
* The end of 98.7 Kiss and the legacy of New York radio locally and globally

* "It Was Written" a discussion with acclaimed writer and filmmaker Nelson George and Johnny Temple, Publisher of Akashic Books

* "Me and my Momma Hopped in that U-Haul Van"- he renewed importance of touring in the post record label age.

* "Division of labor and the Super Artist" - a discussion about the tremendous expectations put upon today's Hip-Hop artist who is expected write, produce, tour and oversee a multiplatform human brand.

The culmination of a week of programming and a year of work. Headlined by Flatbush's own Busta Rhymes. This year's "Busta & Friends" will end the week with a bang. We will also be paying a special tribute to the brother Adam Yauch aka MCA of the Beastie Boys whose untimely passing reminded us that we need to celebrate every day.

In addition to the good Busta Rhymes we will feature a whole host of talent from Brooklyn and beyond.

After Family Day and a day in the sun, send the kids home, get a babysitter, call the fellas, call the girls and let's get busy into the wee hours of the night with live performances, funky DJ's and whiskey shots.