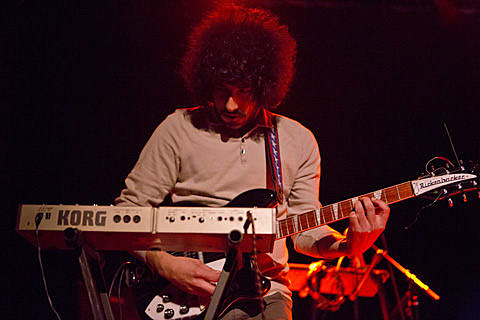 In the statement from Yellow Dogs' manager (who was previously identified as a publicist) on the murder-suicide that killed "two" of the band's members, it was revealed that the shooter, allegedly Raefe Ahkbar, was not a member of Yellow Dogs, contrary to initial reports. USA Today and many other sources mention that the shooter was actually a former member of Yellow Dogs' "sister band" The Free Keys, who also came over to the US from Iran, and were also featured in Baham Ghobodi's film, No One Knows About Persian Cats. Arash Farazmand, the Yellow Dogs drummer who was murdered, was also once a member of The Free Keys.

Meanwhile, it's still not clear who from the Yellow Dogs was killed. The band's manager's statement said that only two of the victims were in the band, Sourosh "Looloosh" Farazmand (guitarist) and Arash Farazmand (drummer), while the third one Ali Eskandarian was a friend and fellow musician. However, in a March 2013 interview with SO Magazine, Yellow Dogs mention that Ali had been their new singer for four months. He's also pictured with them in this photo on their Facebook, and was with the band when we caught them at Music Hall of Williamsburg in December 2012. Yet, the band's Facebook still only lists the other four members sans Ali. An AltSounds interview from 2011 points out that Ali had been living with Yellow Dogs and The Free Keys in the same Brooklyn loft for years.

Yellow Dogs manager Ali Salehezadeh said the shooter hadn't spoken to the victims in months due to "a very petty conflict." Police Commissioner Raymond Kelly said that detectives suspect it was over a money dispute, but that they were still investigating. Update: The NY Times now points out that "There were accusations that [the shooter] had stolen money from the Free Keys, who forced him to leave the band last year, said John J. McCarthy, the Police Department's chief spokesman." Initial versions of the story mentioned he was kicked out of the band, but now it seems it was The Free Keys, and not the Yellow Dogs, he was kicked out of .

You've been asked a lot about your Western influences and what sort of American stuff is big in Iran. Which Iranian artists, aside from Yellow Dogs of course, should the US airwaves be expecting, or does the censorship make that impossible?

Although it's censored and there are restrictions with high internet speed, artists still have a chance to get their music heard.  You should definitely look out for our best friends and "sister band" the Free Keys, as they arrived to BK yesterday and will be calling Brooklyn home.  This Glasslands show will be very exciting because it will be the first time for them to see us play since the two shows we did together back in the DIY illegal space we built together in Iran.  Also be on the look out for the talented street artists and skater brothers ICY and SOT.

Many articles, like a feature on the Free Keys Filter did in 2007, bring up the DIY space that the two bands ran together in Iran.

The Free Keys, though Ahkbar was not a member anymore, played as recently as 10/12 at Arlene's Grocery. Yellow Dogs played 10/23 at Brooklyn Bowl.

Earlier today the Black Lips released a statement on the killing