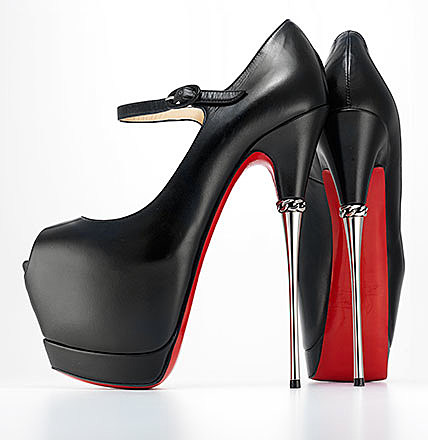 "Killer Heels: The Art of the High-Heeled Shoe" is a new exhibition opening at the Brooklyn Museum on 9/10...

As fashion statement, fetish object, instrument of power, and outlet of artistic expression for both the designer and the wearer, throughout the ages the high-heeled shoe has gone through many shifts in style and symbolism. Deadly sharp stilettos, architecturally inspired wedges and platforms, and a number of artfully crafted shoes that defy categorization are featured among the more than 160 historical and contemporary heels on loan from designers, from the renowned Brooklyn Museum costume collection housed at the Metropolitan Museum of Art, and from the Bata Shoe Museum. Designers and design houses represented in Killer Heels include Manolo Blahnik, Chanel, Salvatore Ferragamo, Zaha Hadid X United Nude, Iris van Herpen X United Nude, Christian Louboutin, Alexander McQueen, André Perugia, Prada, Elsa Schiaparelli, Noritaka Tatehana, Vivienne Westwood, and Pietro Yantorny.

This provocative display, like "Revolution! Works from the Black Arts Movement" and "Divine Felines: Cats of Ancient Egypt", will be all ages, but those 19 years old and younger will get to go for free! They recently announced:

Beginning on September 3, 2014, admission to the Brooklyn Museum will be free for visitors ages nineteen and under, offering greatly increased accessibility and encouragement to visit the Museum, especially for teenagers.

At the same time, the Museum will increase its suggested general admission fees to $16, except for ticketed exhibitions and events, and to $10 for adults sixty-two and over and for students with valid I.D. Current school group pricing will remain the same.

Admission to Target First Saturdays, the Museum's highly popular monthly evening of art and entertainment that takes place the first Saturday of every month (except in September), will continue to be free from 5 to 11 p.m.

Meanwhile, head to the museum on Thursday, August 14th for a wet, musical display, titled "Score the Fountain":

We asked musicians and producers of all genres to create an original score to accompany our Jane and David Walentas Fountain in front of the Museum. We received a number of great entries, and submissions are now closed.

Check back next week for the list of selected compositions, then come enjoy the music in front of the fountain on August 14. This event is free.

More info about the Brooklyn Museum at their website.