Alix of Golden Triangle (left) needs your attention... and for a good cause! 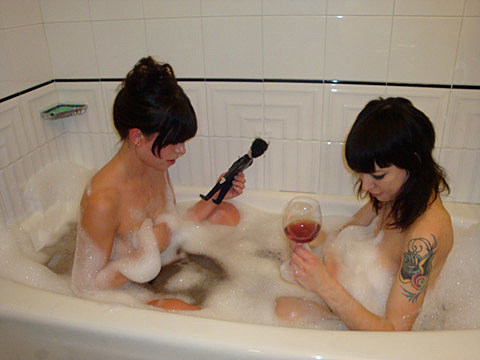 The Rock Lottery began in Denton, TX in 1997 (and in Seattle in 2006). This will be Brooklyn's inaugural Rock Lottery. The premise is simple, but effective. Twenty-five hand picked musicians meet at 10:00AM at the evening's performance venue. These volunteers are organized into five groups through a lottery-based chance selection. The five separate groups are then released to practice at different locations. The musicians have twelve hours to create a band name and three to five songs (with a one cover-song limit). The groups will then perform what they have created that evening in front of a waiting audience.

The Rock Lottery compiles those 25 musicians from varying backgrounds in an attempt to move each out of their comfort zones and into musical exploration. The participants, which include members of Liturgy, Oberhofer, King Missile III, Death Set, Bear In Heaven, Family Band, Les Savy Fav, White Rabbits, and many others, will perform their new pieces at Knitting Factory on Saturday (12/18). Tickets are on sale, and proceeds from the show will go to World Savvy, a local charity focused on teaching the "next generation of leaders to learn, work and live as responsible global citizens in the 21st century."

So what do the two ladies in the above picture have to do with The Rock Lottery? The one on the left is bassist Alix Brown of Golden Triangle, who is a participant in the show. The lady on the right is Carlie Rabalais (also Golden Triangle) and the picture is a production still taken from the video shoot for "Crystal" by Carlie's other band X-Ray Eyeballs who will release heir debut album, Not Nothing, via Kanine Records on April 19th, 2011. No word on when "Crystal" will hit the rounds, but you can catch the band at a pair of shows in the near future, including supporting Tyvek and Fergus & Geronimo at Mercury Lounge on 1/16 (tickets are still on sale) and Bruar Falls this Wednesday (12/15) with Food Stamps + My Teenage Stride.

Full participant list in The Rock Lottery, some recent video of X-Ray Eyeballs at Shea Stadium, and tour dates below.