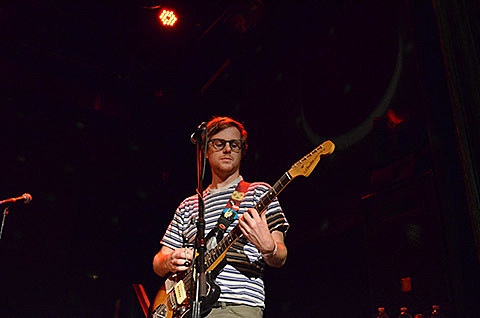 The Brooklyn Night Bazaar is up and running in its new permanent Greenpoint location, offering shopping, food, fun, and free music every Friday and Saturday. There's a few previously discussed upcoming shows, including SISU on Friday (12/20), two Psychic TV shows later in the month, and the Panache weekend (1/10 & 1/11) that includes Mac DeMarco, Imperial Teen, Dot Wiggin Band and more. And since we last spoke, more shows have been announced.

The So So Glos play this Saturday (12/21) with a stacked lineup of California X, Palehound, and Darlings. It's the night after So So Glos open for Brand New at The Paramount.

Swearin' co-headline with Cymbals Eat Guitars with strong local support from Low Fat Getting High on January 3, a one-off before their 2014 tour which includes NYC shows at Cake Shop (3/6) and Rough Trade (3/7) (tix).

Synth popsters MNDR will be there on January 17 with The Mast and Yeasayer associate Sinkane is there the next day (1/18).

Macaulay Culkin's pizza-themed Velvet Undergound tribute band The Pizza Underground is there on January 24 opening for French Horn Rebellion (maybe they'll have more than eight minutes of material by then), along with Seasick Mama and Heavenly Beat. And the day after that, the highly entertaining Har Mar Superstar (1/25), who just played Bowery Ballroom (12/17) will headline.

Brooklyn's dark, reverby Crystal Stilts will take over on February 8.

Other additions were announced too, and you can check out the full current schedule (along with full lineups for each date, if available), below...