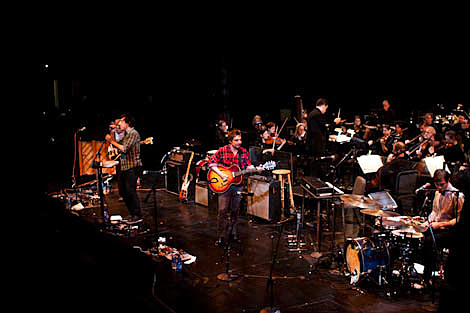 The future for the Brooklyn Philharmonic may look a bit bleak -- the group recently canceled its 2009 season -- but you can still catch a performance by the ensemble today (Saturday, 8pm) at Pier 17, as part of the South Street Seaport's annual Children's Day. Their performance will be accompanied by the year's only major fireworks show visible from Brooklyn and lower Manhattan (since this year's 4th of July fireworks will be in the Hudson).

The show's full program, which includes the music of Randy Newman (esteemed composer of the Toy Story score, among other things), below...

The Brooklyn Philharmonic, Irish singer/songwirter Jack Lukeman, and an amazing classical string trio of young NYC sisters, are slated to perform on Pier 17 at a free sunset concert the includes the summer's only major pyrotechnics show visible from both lower Manhattan and Brooklyn!

Noted American conductor Alexander Platt will lead the Brooklyn Philharmonic in performances of Aaron Copland's Music for the Theatre, and Mozart's Symphony No. 35 in D, "Haffner Symphony," the latter as the synchronized accompaniment to the two-barge spectacular Target Fireworks show -- a 20-minute extravaganza that rivals any major display in the city.

In addition, the evening concert features Jack Lukeman performing his arrangements of the songs of Randy Newman in collaboration with the Brooklyn Philharmonic. Opening the show will be the Harlem-based trio JoSunJari.