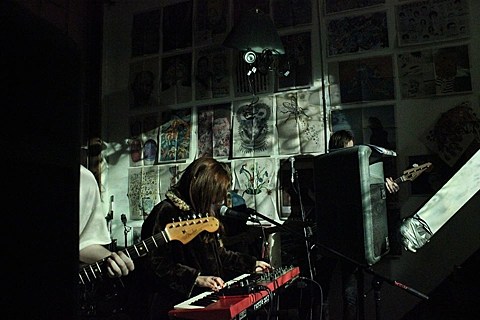 Bushwick, Brooklyn venue Emet, which has recently hosted shows from Turnip King, Mannequin Pussy, Grass Is Green, and more, has allegedly been shut down due to legal issues. A Facebook post from Oliver of Ghostpal regarding this Friday's (5/2) show reads:

Hey yawls. Some bad news here, not just for us but for NYC music in general. Emet has been shuttered do to legal hassles. Which means a lot of things, one of which is that we're now short a venue for our freak out on Friday. It may need to be postponed, but for the time being we're trying to see if we can move it somewhere. We're trying some angles but it's hard to knock together on short notice, and we probably need your help. A call to arms! Anyone got ideas/leads/dreams in terms of finding a spot for a bonkers party on Friday night?

That sucks. Meanwhile, the venue has not yet announced this themselves, so details are sparse, but stay tuned for more info.

Hey, as you may have heard elsewhere, we have gone dark for the time being because of landlord/neighbor issues. This ain't the last you'll hear from us, though, and we're seeing what we can do to get back on our feet either here or elsewhere as soon as possible. The poetry reading on May 9th is still happening, as will be the Showpaper potlucks and other non-musical events. The love you all have shown us over the last nine months is so fucking wild, thank you. -Stuart, Aaron, Ethan and rest who made Emet happen.

Friday night's show, which still needs a home, is presented by Windsor Terrace recording studio, musician's collective and record label Mama Coco's Funky Kitchen. MCFK bands on the bill are Sons of an Illustrious Father, Ghostpal, The Freaky Baby Daddies, NO ICE, and instrumental Brooklyn via Minneapolis trio Iced Ink whose new album "Television Ears" is streaming at Bandcamp and was recently reviewed by Jersey Beat.