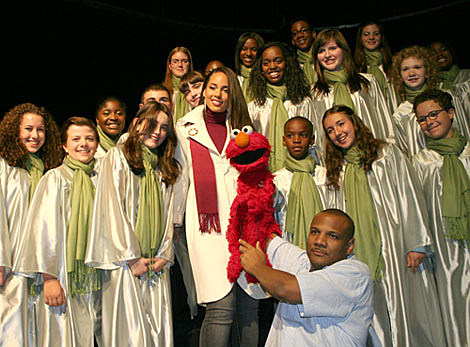 "With a vital role on band sensation Grizzly Bear's new CD Veckatimest and an appearance this Thursday, May 28th, backing up the band at Town Hall, the Grammy Award-winning Brooklyn Youth Chorus embarks on a six-week run of performances spanning music as diverse as indie rock and Mahler's 8th. That's business as usual for the BYC, which has sung with Alicia Keys for a Sesame Street special, backed Elton John at his birthday concert at Madison Square Garden, premiered Philip Glass's Symphony No. 5 with the Brooklyn Philharmonic, and commissioned a body of work by musicians including Nico Muhly and Fred Hersch. The BYC is an astonishingly active group of kids that performs on the highest levels of the New York music scene, whether it be symphonic, rock, hip-hop, gospel, avant-garde classical, jazz..." [press release]

Unfortunately it looks like the Chorus will only be at one of Grizzly Bear's three NYC shows. All BYC dates below...

o May 26: Veckatimest, the eagerly-awaited CD by Brooklyn-based indie-rock band Grizzly Bear, comes out on Warp Records. It features the BYC on several tracks, one of which has been pre-released as a free download.

o May 28 at Town Hall: the BYC performs live with Grizzly Bear.

o May 29 and 30 at the First Unitarian Church in Brooklyn: the BYC's annual solo spring concerts, unique in that they offer a chance to hear the chorus not as guest collaborator-but as the featured element. The program ranges from Kodaly and spirituals to new works written for them by Jim Papoulis and Nico Muhly.

o June 11-27 at Avery Fisher Hall: the BYC is in the middle of a busy orchestral season, including nine concerts under the baton of Lorin Maazel in his very last performances with the New York Philharmonic. Remaining performances include Britten's War Requiem, June 11-13; and Mahler's 8th June 24-27.

o Late June: the release of the new single "I Will Come Back" by Holy Ghost, another popular New York rock band that chose to incorporate the ethereal voices of the BYC. This is for a full-length album which will come out on the DFA Record label, distribution through EMI. Grammy nominated producer James Murphy is overseeing the project.

o Now through November: the BYC rehearses with downtown iconoclast Phil Kline on an evening-length score that Kline is currently writing for them, gearing up for the premiere of the Wally Cardona dance piece "Really Real" at BAM's Next Wave Festival in November (see below). The entire score will be comprised of children's voices, nothing else.

o December 13, 2009 at Carnegie Hall: the BYC will sing in John Adams' "El Nino" with the Orchestra of St. Lukes, under the baton of Adams. The BYC won a Grammy in 2005 for their recording of John Adams' On the Transmigration of Souls (Nonesuch), which they premiered with the New York Philharmonic under Lorin Maazel in 2002.