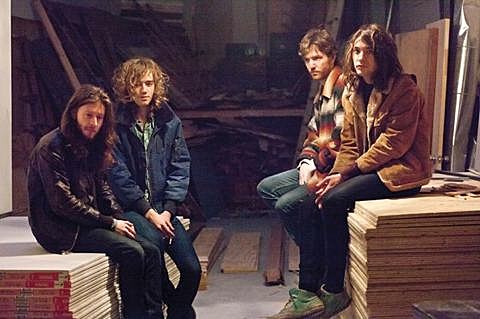 Probably the best discovery of this year's Northside Fest for me was Brooklyn's Spires, a band whose name I'd seen a lot but never managed to catch till then. The quartet make groovy, retro pysch pop that recalls both obvious '60s touchstones, as well as late '80s UK groups like The Stone Roses or Shack. The band's debut single is due out in September and you can stream tracks from it below.

Spires have no shortage of upcoming local shows. They play tonight (6/26) at Fontana's which is a free show. They also open for Dax Riggs at Mercury Lounge on Friday (6/28, tickets); and play Grand Victory on Tuesday (7/2) with Future Punx, The Capitalist Kids, and The Young Rochelles.

They will also have a July residency at Pianos playing Tuesdays on 7/9 (w/ Hints and Painted Zeros), 7/16 (w/ Cosmonaut, Turnip King and more TBA), and 7/23 (w/ Candide, Coasta and more TBA). Tickets to all three Pianos residency dates are on sale now. In the midst of those, Spires will also play Shea Stadium on July 13 with Visuals.

All upcoming dates are listed, along with song streams, below...