BROOKLYNVEGAN BLOG RADIO | THE PLAYLIST - MAY 20, 2006
I was pretty nervous about being on the air for the first time, but overall I'm happy how the first episode of BrooklynVegan Blog radio sounded. To get things started, I ran through the first five months of my blog: August to December 2004. I may continue the format next week by highlighting the first half of 2005. At that rate, I'll be playing brand new music by the 4th or 5th week (and then forever).

Hope you liked it if you listened. Here's the playlist w/ blogified commentary. 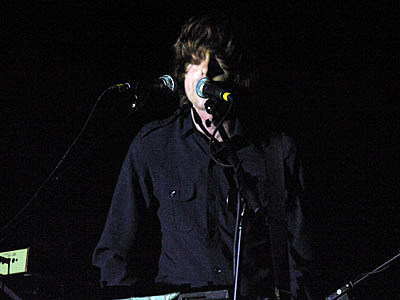 During the first month of August 2004, I also posted pictures of the Zutons @ Mercury Lounge and None More Black @ Knitting Factory.

Actually a live version of the Decemberists covering Joanna Newsom was my second post ever. The Decemberists later recorded it for the 2005 Believer Magazine compilation CD that came out during the summer of '05.

In December 2004 the NY Times used the term "Freak Folk" to categorize the scene comprised of Joanna, Devendra Banhart, Antony & The Johnsons, and their family of friends....

The Antony cover by Devendra is also on the Believer CD. I first heard it when Devendra performed it live at Tonic in February 2005.

TRIUMPH WAS AT THE PANTY FLASH (more) 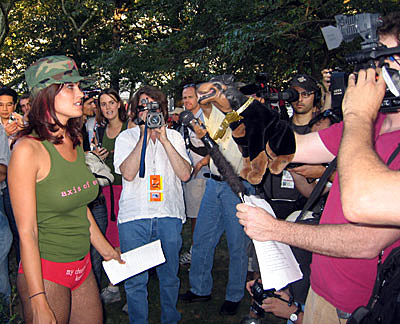 Next I pointed out that my blog isn't always about music. In August 2004 the Republican National Convention came to NYC and a company called Axis of Eve staged a protest that consisted of girls and guys stripping to their panties. The protest came in the form of Anti-Bush slogans emblazoned on the undergarments. The pictures I posted from that event went on to become one of the most popular pages ever on BrooklynVegan.com, thanks mainly to a link on Fleshbot. That same month I posted pictures of Sonic Youth @ Webster Hall and Murphy's Law on a boat. Coincidentally, both of those bands sing songs about panties... 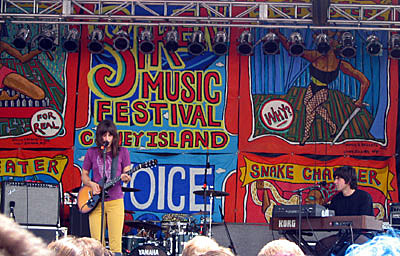 In "Eleanor put your Boots on" Franz Ferdinand sing about Eleanor from the Fiery Furnaces and Coney Island, more specifically they sing about the Coney Island roller coaster . Some of the earliest concert photos that appear on this blog are of the Fiery Furnaces playing the 2004 Siren Festival in Coney Island. In July of 2005 I found a picture of Eleanor and crew posing in front of the roller coaster from the same day. What does this all mean? It means I need to get more sleep. 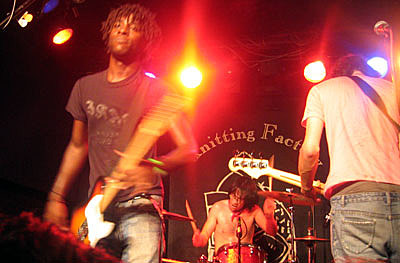 Two more exciting things happened in September 2004. Canada's The Arcade Fire released Funeral and the UK's Bloc Party played their first ever NYC shows @ Knitting Factory and Tribeca Grand. Needless to say, those who were reading my website throughout 2004 and 2005 heard a lot about those two bands. 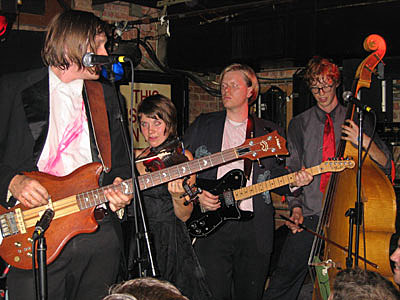 The CMJ Music Marathon is a yearly music industry conference that takes over all the music clubs in NYC for a few days. This year it begins on October 31, 2006 - the same day CBGB closes forever. October of 2004 hosted the first CMJ while I was blogging. The initial lineup was the subject of my 7th post ever. It was at that CMJ that I saw the Arcade Fire for the first time at Mercury Lounge. Other highlights included a set by Sufjan Stevens at the Museum of Television & Radio for KEXP, Magneta Lane's first U.S. show downstairs at CBGB, and three consecutive nights of Jonah Matranga (Onelinedrawing).

U2 UNDER THE BROOKLYN BRIDGE (more) 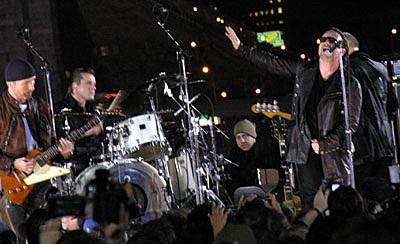 In November 2004 I saw the reunited Pixies play in Montreal and U2 play under the Brooklyn Bridge for free. David Bowie also expressed his love for The Arcade Fire and The Secret Machines that month. 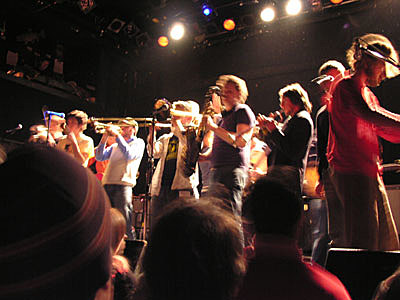 The Pixies' track I played is Debaser live from NYC's Hammerstein Ballroom in December of 2004. It's from one of the eight sold out nights they played there. Each night was taped. Each night had a different opener. One night was Broken Social Scene who played two headlining shows at the Bowery Ballroom the same week. I went to all three shows, so I ended the radio show with an ode to BSS and Arts & Crafts.

Then I thanked people for listening and reminded them to tune in next week (June 6) for episode two, and to tune in tomorrow (Wednesday) for Gorilla Vs. Bear, and every Monday for Product Shop NYC.

I didn't mention the next bit on the show, but while I'm reminiscing about 2004, I might as well mention some holiday shows that ended the year on a high note... 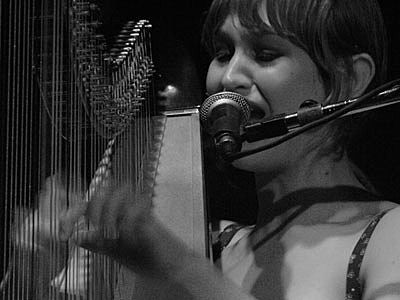 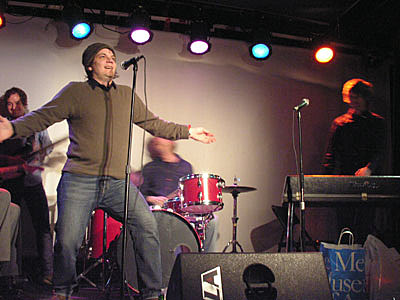