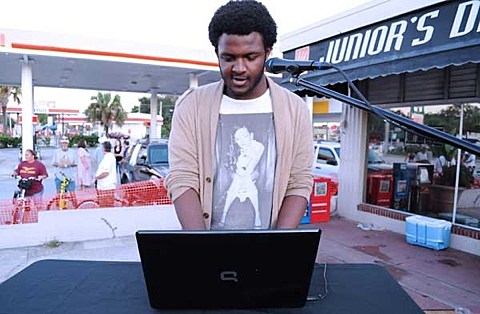 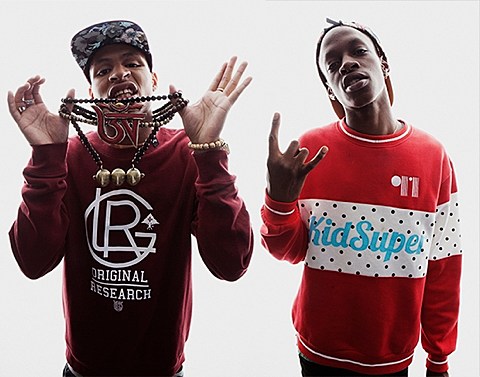 The 2013 BrooklynVegan official SXSW showcase (the one that isn't a metal show or a Red Cross Syria benefit) will take place on Friday, March 15 at Maggie Mae's Rooftop (323 E. 6th Street in Austin, TX). SXSW badges are welcome, and we'll also have some general admission tickets for sale at the door (come early!).

The lineup this year, as you can see in the flyer below, leans toward the dancier side of things, with a headlining 1 AM set from Orlando downtempo artist XXYYXX, who was recently in NYC for two sold out shows at 285 Kent. Before him, there will be sets by 3421, who are bringing their live-band dubstep over to Austin all the way from Israel, a set by manic NYC rapper Mykki Blanco, electro-shoegazers Man Without Country, R&B-indebted producer Giraffage, Brainfeeder-affiliated rappers The Underachievers (whose free mixtape, Indigoism, is out now), the synth pop of Pictureplane, rapper/stripper/Grimes collaborator Brooke Candy, and finally, Zebra Katz, who you know best for "Ima Read.". Though (the show is in a week), it didn't all finally fall in place until last minute, this one was fun to put together. 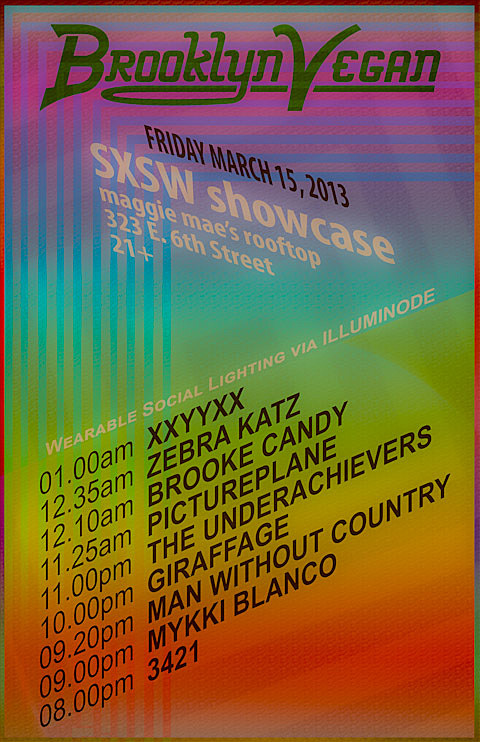 To make it even more of a party, we'll have wearable "social lighting" available courtesy of Illuminode. The lights, which people will get to try on when they walk in the door, sync with the music (first come, first served on those, but you can always grab one when someone returns theirs too).

The show begins at 8 PM and as noted above is one of three official BrooklynVegan nighttime events at SXSW, including the one the same night with Omar Souleyman, Black Lips, Deer Tick, and more; and the official BrooklynVegan/Invisible Oranges metal showcase on Saturday (3/16) with Pallbearer, John Baizley (Baroness), and more. We also have four days of day parties (March 13-16, full lineups coming soon!).

As is usually the case with SXSW, many of the bands on our showcase are stopping by NYC for shows before and after SXSW also. As mentioned, 3421 plays Mercury Lounge on 3/20, Man Without Country plays Pianos (tonight, 3/7) and Knitting Factory (3/9), Giraffage plays 88 Palace on 3/9 with JETS. And Mykki Blanco and Pictureplane always have stuff going on in the area too.

See you in Austin.