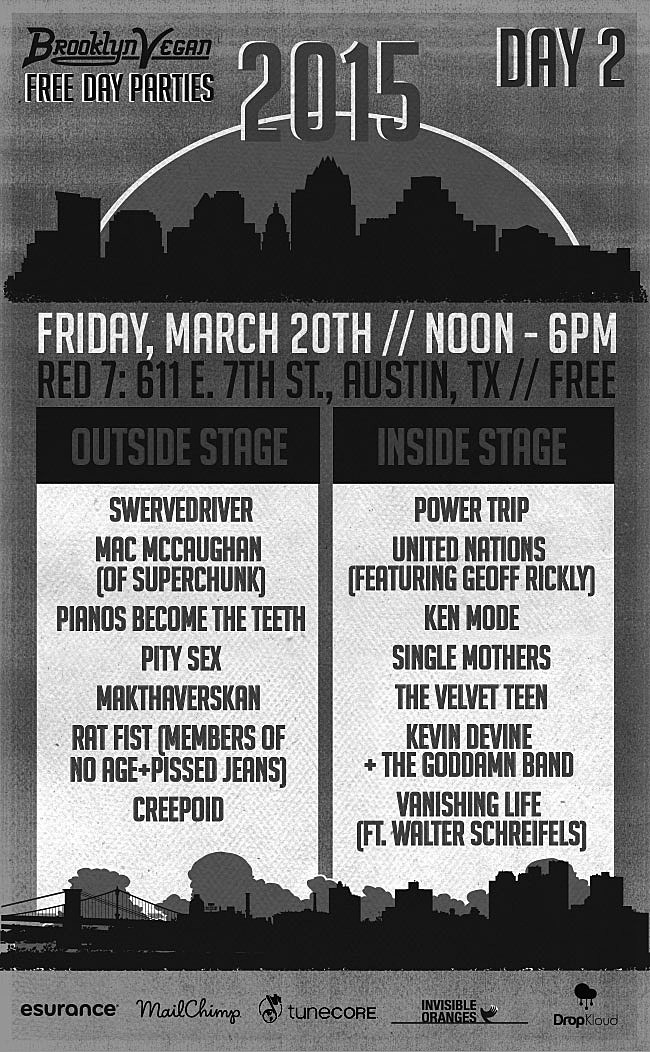 We're happy to announce that we're returning to Red 7 for three FREE BrooklynVegan SXSW day parties this year on the Thursday (3/19), Friday (3/20) and Saturday (3/21) of SXSW. RSVP in one spot for all three days.

Please RSVP for all three days.

The Friday inside show begins with Walter Schreifels' (of Gorilla Biscuits, Quicksand, Rival Schools, etc) new band with two Trail of Dead members, Vanishing Life, followed by a full-band set by long-running singer/songwriter Kevin Devine (who's in the midst of a series of splits with Nada Surf's Matthew Caws, Perfect Pussy's Meredith Graves and more). Then comes The Velvet Teen, who just announced their first LP since 2006 on Topshelf Records. After that, the inside stage gets heavier, with snotty Canadian punks Single Mothers, sludgey post-hardcore band KEN mode, crossover thrashers Power Trip, and finally the screamo band of former Thursday singer Geoff Rickly, United Nations.

Outside, the day begins with Philly shoegazers Creepoid (who have a new LP coming), followed by Rat Fist, the new-ish punk band with No Age and Pissed Jeans members. Then it's Swedish post-punks Makthaverskan, their shoegazey Run for Cover labelmates Pity Sex, and atmospheric post-hardcore band Pianos Become the Teeth (who also have members in United Nations). The day wraps up with two veterans: Superchunk frontman Mac McCaughan (who has his debut solo LP on the way) and reunited shoegazers Swervedriver.

Thank you also to esurance who will provide expedited access to our shows to some people who are following @Esurance on twitter each day, and to MailChimp who powers the daily BrooklynVegan newsletter you'll get on if you RSVP for our shows.

Follow @BVSXSW on Twitter for more updates all week long, and keep an eye on BrooklynVegan.com/SXSW for full lineups too..