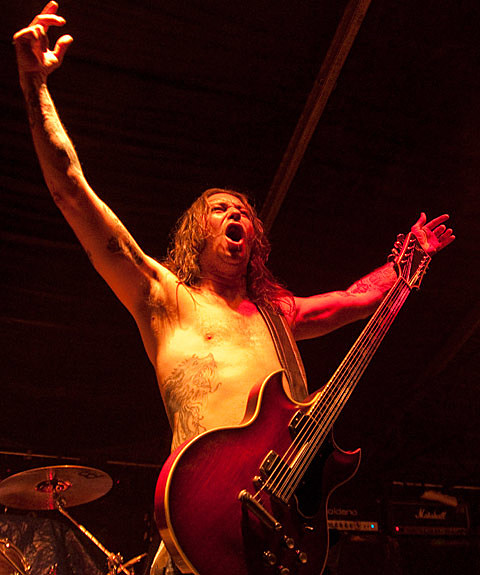 March 16th, March 16th, March 16th! If you're going to be in Austin, save the date on your calendar folks! On Friday March 16th, 2012 at Scoot Inn (1308 e4th St), BrooklynVegan, The Power of The Riff, and Southern Lord will combine forces for a MARATHON of events that kickoff at noon and end waaaaay after the sun goes down.

The FREE daytime portion, in conjunction with the four-day Thrasher/Converse "Death Match" event at the venue, is an all-ages shindig that will kick off at noon and feature a skateramp with skaters and bands all day long. Shortly after doors open, expect to see eleven bands across two stages including sets from the following:

That's right... High on Fire AND Off! AND Trash Talk (playing their FOURTH year of SXSW shows with us) AND Black Cobra AND Ceremony all in the same space, not to mention the awesome undercard of bands like Deafheaven (playing their second year of SXSW shows with BV), new favorites Full of Hell, Balaclava, Heartless and Dead in The Dirt. It is going to be insane, so bring a hard hat.

As the day show comes to a close, we'll get ready for our night show at the same venue... amounting to a total of FOURTEEN HOURS of destruction! Not to mention the food trucks, a full bar, and so much more to keep you fed and hydrated (or buzzed, depending on your poison) during the onslaught. Stay tuned to BrooklynVegan for details regarding the official night showcase (it has been announced), and for more about the day show (or our OTHER day show on Saturday at Lovejoys), including set times. In the meantime, head below for video of some of the bands playing our MEGA-show at Scoot Inn on March 16th!