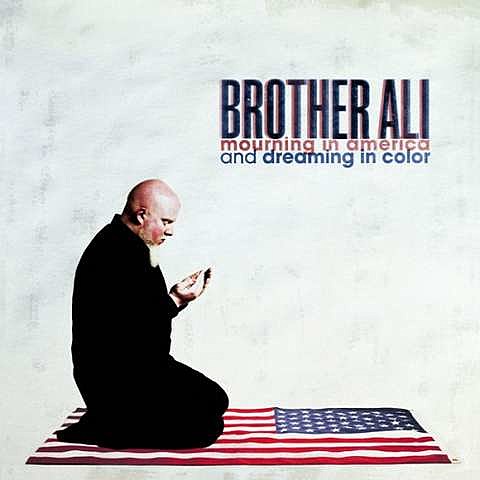 Minneapolis rapper Brother Ali is set to release his new album, Mourning In America and Dreaming In Color, on August 21 via Rhymesayers. That's the cover art above. The album was produced by Jake One. You can stream "Stop The Press," from that album below.

Brother Ali will support the album with the 'Mourning In America' tour with Homeboy Sandman, who put out his first release for Stones Throw earlier this year, and DJ Sosa. He'll be touring with his new live band, Blank Tape Beloved, which features Jake One. That tour hits NYC for a show on September 27 at Bowery Ballroom. Colorado's The Reminders will also be supporting some dates on the tour, including the NYC show. Tickets for that show go on sale today (6/29) at noon.

In related news, StarTribune reports that Brother Ali was arrested in Minneapolis last week as he was taking part in an Occupy Homes protest for "trespassing and refusing police orders to leave the premises." They write:

Thirteen protesters were arrested out of about 125 at the site. It was one of at least a dozen protests nationwide, timed to a meeting at PNC Bank in Pittsburgh. Occupy leaders blame a PNC computer glitch for leading to the foreclosure of the former Cruz family home at 4044 Cedar Av. S.

This was a first-time arrest for the rapper, who has been active in several community causes. He organized a block party last summer at Masjid An-Nur, the North Side mosque where he and U.S. Rep. Keith Ellison worship, offering help to tornado victims in north Minneapolis, where he spent his teenage years.

Ali became a Muslim at age 15 to lessen the outcast status he felt as an albino. "The Muslim teachings I know tell you not to break laws," he said, so he consulted spiritual leaders beforehand about the possibility of being arrested. He said he spent about seven hours in jail. He was released on $50 bail and is due in court July 5.

Brother Ali since tweeted, "I appreciate all the love and support for my little involvement in Occupy Homes. The real heros are the families who lead the charge."

A list of all Brother Ali dates and that song stream are below...