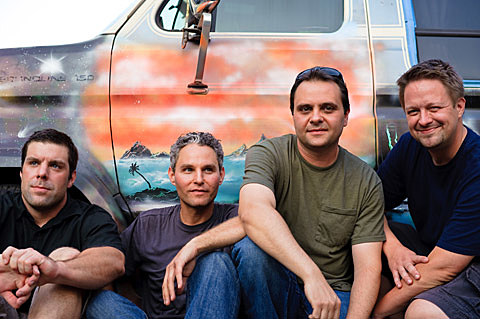 By definition, Broughton's rules were a set of guidelines set by boxer Jack Broughton. They brought civility to the then blood-thirsty sport of boxing and eventually gave way to the current rules of today.

Music is a bloodsport all its own, and a band named Broughton's Rules are here to throw their hat in the ring with their debut LP Bounty Hunter 1853. Due via Relapse Records on November 22nd, the band features ex-members of Don Caballero, so it's not hard to understand why these Pittsburgh puglists have shared the stage with the likes of Polvo. BR's mathy, post-rocky tunage tips the hat to their former band, as well as post-rock-y greats like Mogwai on their LP and in "Night Smoker", the song available for download above, and streaming below.

Broughton's Rules have a few dates on their calendar in the coming weeks, including a pair of NYC shows on Dec 2nd at Cake Shop and December 3rd at The Charleston. Full tour sked, the song stream, and some (blurry, but good sound) video is below...