Bruce Lamont with Yakuza at Gramercy Theater (more by BBG) 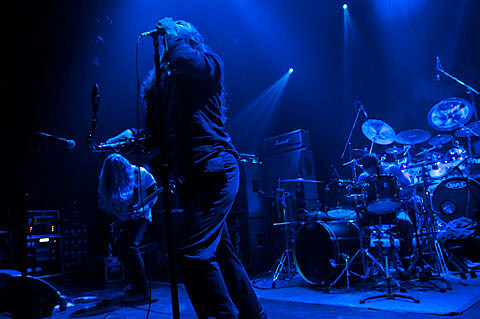 Bruce Lamont of Yakuza/Bloodiest/Circle of Animals will perform a rare solo set on February 27th at Union Pool in Brooklyn, one-of-four solo performances scheduled for the artist who is currently still out on the road with Led Zeppelin II. Union Pool will also feature an appearance from Cocaine & Abel and more TBA, and will be the lone East Coast date though two days earlier he is in Ohio.

Lamont recently welcomed his first solo LP via At a Loss Recordings, Feral Songs For The Epic Decline, and will open the 2011 Profound Lore SXSW showcase in Austin. More details on that showcase are on the way, but in the meantime take a look at what Nanotear has lined up for the March festival.

All Bruce Lamont tour dates and some video of Lamont in action, below...