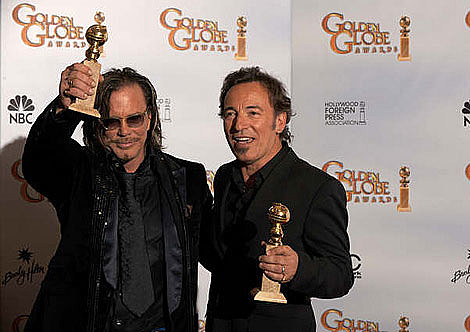 Mickey Rourke, considered THE coolest guy in Hollywood by all of the other "genuine" cool guys, won the Gold Globe this evening for Best Actor in "The Wrestler."

As if art is imitating life, Rourke played a down and out professional wrestler who makes a valiant comeback just as Mickey is doing as you read this.

The crowd went wild as Mickey has always been well loved and a favorite amongst his acting peers.

Additionally, Bruce Springsteen received the best song prize for the title track to "The Wrestler," stating, "This is the only time I'm going to be in competition with Clint Eastwood," said Springsteen, referring to the filmmaker who had a song nomination for writing the title tune to his "Gran Torino." "It felt pretty good, too!" [The Lang Report]

In other Springsteen news, he is going to play at an Obama pre-inauguration event, you can catch him in the Superbowl halftime show, he made a lot of money in 2008, he's up for two Grammys, and he has a new album called "Working on a Dream" coming out January 27th... 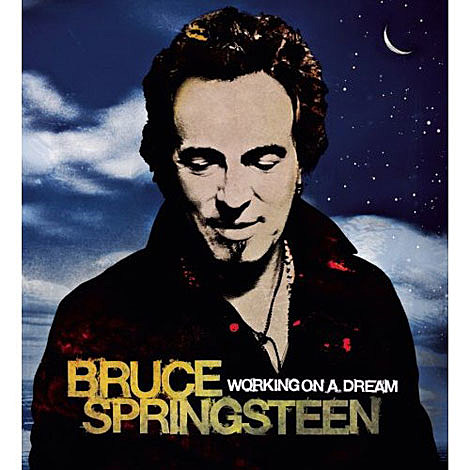 . "Working on a Dream" was recorded with the E Street Band and features twelve new Springsteen compositions plus one bonus track. It is the fourth collaboration between Springsteen and Brendan O'Brien, who produced and mixed the album.

Video of of Mickey Rourke discussing how Bruce Springsteen came to write "The Wrestler", below...

Some notes on the beginnings of Working on a Dream. During the last weeks of mixing Magic, we recorded a song called "What Love Can Do." It was sort of a "love in the time of Bush" meditation. It was a great track but felt more like a first song of new record rather than something that would fit on Magic. So our producer Brendan O'Brien said, "Hey, let's make another one right now!" I thought, no, I haven't done that since my first two records came out in the same year. And usually I don't write that quickly. But that night I went back to my hotel in Atlanta and over the next week, I wrote several songs ("This Life," "My Lucky Day," "Life Itself," along with "Good Eye" and "Tomorrow Never Knows") that formed the beginnings of our new album. Excited by the sounds we made on Magic I found there was more than enough fuel for the fire to keep going. Brendan and I demo'd these songs before we left the studio and agreed we'd somehow find time during the touring year to get this record made.

Over the past 10 years with Brendan, our ability to get records done and to work on a variety of projects at the same time (Yes, we can multi-task!) has allowed us to get a steadier stream of our best music out to our fans. This is something I've always wanted to do. We found time to book sessions, get the band while it was hot off the road, write and record a new record, while giving our audience what I hope was some of the best E Street shows we've ever done. We're excited about you hearing this music and I just wanted to drop a line about how it all started. Have a great holiday and we'll see you in the New Year!

Heath Ledger won a Golden Globe too. AR Rahman won for best score for Slumdog Millionare. He thanked M.I.A. in his acceptance speech.