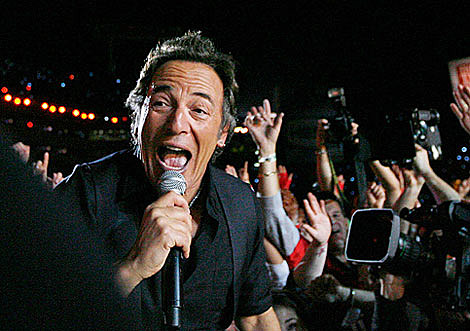 The Boss had promised "the last 12 minutes of a three-hour show," and he delivered, starting at fever pitch and turning up the power from there. He did not really need the searchlights and the fireworks with his stalwart New Jersey troops behind him, but the extra power of 70,000 voices singing along did not hurt.

10th Avenue Freeze Out was almost a low-key opener, but once Springteen had strapped in his trademark Telecaster for Born To Run, the momentum was unstoppable. Working On A Dream, the title track of the new CD, was a nod to his stated reason for finally agreeing to do the show - "We've got a new album out" as he admitted last week - but a gospel choir and a stadium full of fans waving flashlights made it feel like an instant anthem anyway.

It was already a hard act for the Arizona Cardinals and Pittsburgh Steelers' second half to follow, but the big question remained - what would be the finale? Surely not Born In The USA, an anti-war song despite its apparently patriotic chorus? No, it was Glory Days, an absolute stormer even if its message is downbeat, not that anyone in the stadium or onstage seemed to care. Glory Days, yeah they'll pass you by - was that directed at Kurt Warner of the Cardinals or Ben Roethlisberger of the Steelers? [Times Online]

Tickets also go on sale Monday morning for Flight of the Conchords shows.

Tickets went on sale Sunday for the Paul Simon shows at Beacon Theater.

Video of the Superbowl halftime show, the guy almost dropping the guitar, and Bruce sliding into the camera included, below...