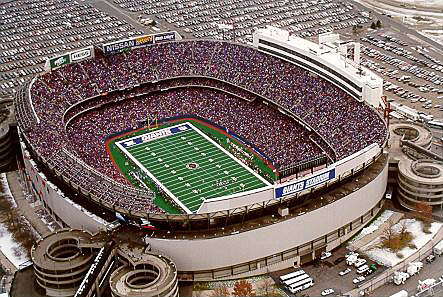 "Bruce Springsteen announced from the stage last night at his Izod Center concert in East Rutherford, NJ that he and the "legendary" E Street Band will return as the final major musical act to play Giants Stadium on September 30, October 2, and October 3. Tickets go on sale June 1 at 10am Eastern. Springsteen holds the record as the number one selling artist at the Meadowlands (which includes Giants Stadium) in New Jersey, having sold out 56 concerts to date with the E Street Band.

Bruce plays the Izod Center again this Saturday night (5/23). This week's two NJ shows caused a lot of headaches, at least partially due to the way Ticketmaster was handling the sale.

This season will be the last season the Jets and Giants play at the East Rutherford, N.J., field. The teams are building a new park adjacent to the current one.

The Giants have played in the stadium since 1976, the Jets, who used to call Shea Stadium home, have played there since 1984. While the teams have shared the park, the Giants, who also train in the area around the stadium, have always had more of a claim to the stadium than the Jets. [USA Today]