the show ended with fireworks 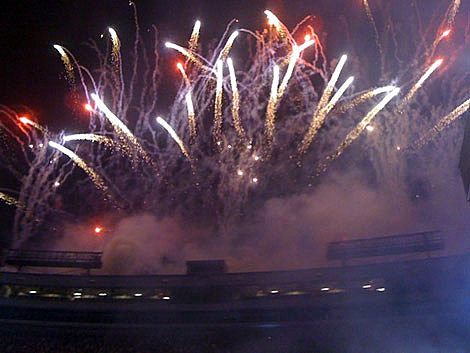 Concertgoers were welcomed with a pre-show message on a huge video screen hanging over the stage: "Tonight is the last concert at Giants Stadium. October 9, 2009. Thank you New Jersey!"

Springsteen and his E Street Band announced, ahead of time, that they planned to play their "Born In the U.S.A." album in its entirety at last night's show. They have played one of their classic albums at each show on the stand: "Born To Run" on Sept. 30 and Oct. 8, "Darkness On the Edge of Town" on Oct. 2, and "Born In the U.S.A.," for the first time, on Oct. 3.

Springsteen and the band also will perform at Madison Square Garden in New York on Nov. 7 and Nov. 8. But last night's show could be the last home-state E Street appearance for quite a while.

Last month, guitarist Steven Van Zandt said in a conference call with reporters that after the current tour ends, Nov. 22 in Buffalo, the band will be off for "I don't know how long -- a year, year and a half, two years."

In his new book "Big Man: Real Life and Tall Tales," E Street saxophonist Clarence Clemons wrote that after the current tour, the band plans to have "a long, long recovery period."

This was the 24th show by Springsteen and the band at Giants Stadium. They also performed there six times in 1985, 10 times in 2003, and three times last year. [Star Ledger]

Despite crazy Internet rumors, Bruce Springsteen & the E Street Band's final show at Giants Stadium last night (10/9) (it was the last show at the venue) (not Bruce's last show ever) did not feature any special guests, not even Bon Jovi. More pictures coming soon HERE. Setlist below...

This is a written copy my friend got his hand on, BUT.... 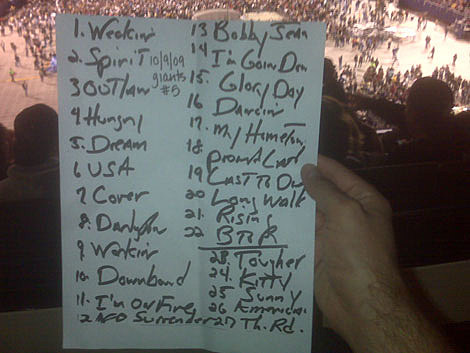 This is what was actually played (includes Born in the USA in its entirety)....