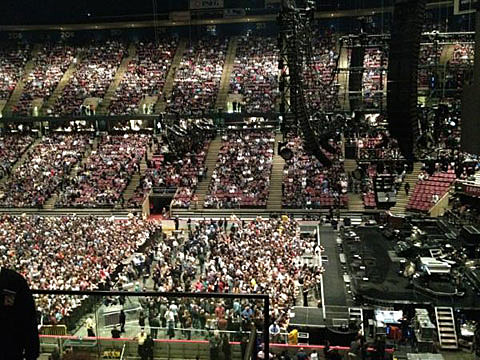 "Mr. Springsteen, 62, has never had a problem wringing uplift from struggle; that was the implication of the show's most rousing songs, like "Born to Run," "Badlands" and "The Promised Land." And he has engaged poignantly with national tragedy. Among the other highlights here were "The Rising," originally a salve for Sept. 11, and "American Skin (41 Shots)," inspired by the 1999 police shooting of Amadou Diallo and rededicated, during a show last week, to Trayvon Martin." [NY Times]

Bruce Sprinsteen's "Wrecking Ball" tour hit the Izod Center in his home state of NJ last night (4/3) for the first of two in-demand shows at the venue formerly known as Continental Airlines Arena and Brendan Byrne Arena. "Wrecking Ball" was the 2nd of 25 songs the E Street Band played. Check out the full setlist below...

---
Bruce Springsteen & the E-Street Band
Apr 3, 2012 - Izod Center, NJ SET LIST
We Take Care of Our Own
Wrecking Ball
Badlands
Death to My Hometown
My City of Ruins
So Young and in Love
The E Street Shuffle
Jack of All Trades
Seeds
Prove It All Night
Easy Money
Waitin' on a Sunny Day
The Promised Land
Apollo Medley
American Skin (41 Shots)
Because the Night
The Rising
We Are Alive
Thunder Road
Rocky Ground
Out in the Street
Born to Run
Dancing in the Dark
Land of Hope and Dreams
Tenth Avenue Freeze-Out

Bruce Springsteen played with lots of special guests right before the tour began at SXSW, and before that at the Apollo.