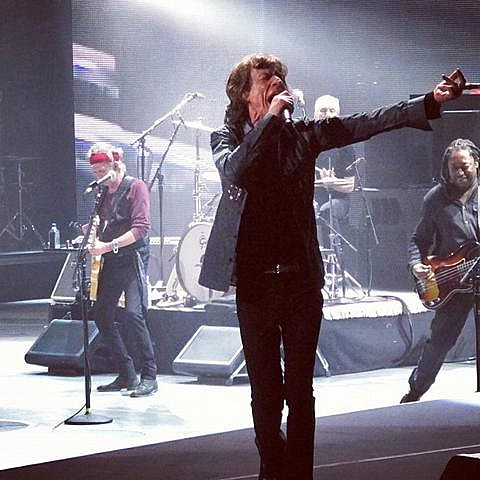 The Rolling Stones came to the US/NYC area for their first of four appearances here on Saturday for a Barclays Center show. Gary Clark Jr. and Mary J Blige joined them for that one, and the setlist (which you can see HERE) was pretty similar to their London shows. The Stones next play the huge Sandy benefit at MSG (12/12/12) and then head to Newark, NJ for two Prudential Center shows (12/13 and 12/15). The 12/15 will be streamed live and the Stones just revealed some pretty huge guests for that one: fellow 12/12/12 musician Bruce Springsteen, younger blues rock torchbearers The Black Keys, and megastar Lady Gaga.

In other news, NY Times posted a review of the Barclays Center show and here's an excerpt:

What is a Stones show? Musically, now that they're in their 50th year and a long time before now, it doesn't seem to be so much about the performances you're actually hearing in real time. It's an oldies show that can become a flickering re-enactment ritual: momentarily you hear a sound that's both well-worn and alive, with a huge amount of meaning attached to it -- it's almost always a guitar riff or a drum fill -- and then it's gone, pulled under into a more functional or starchier or sometimes sloppier passage. And visually it's about Mick Jagger's stamina. Saturday's show was the start of the American part of the Stones' "50 and Counting" tour; as long as he was on stage, during the show's two and a quarter hours, he never stopped. In running shoes and stretchy black clothes he bounced on his toes with knees slightly bent and swinging independently of each other, like a woman in high heels trying to walk in more than one direction.

You can check out a few videos from that show below.