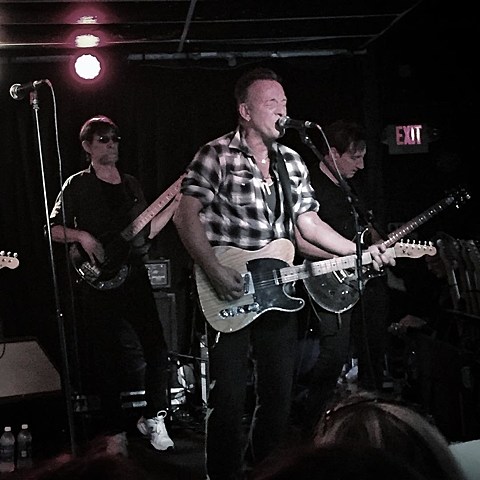 Call it a love letter to Asbury Park.

More than two hours of rock 'n' roll from Bruce Springsteen, Joe Grushecky, Eddie Manion and Grushecky's Houserockers in a packed and steamy Wonder Bar on the city's Ocean Avenue on Saturday, July 18. It was a surprise appearance by Springsteen, who came on stage 10 minutes into the Grushecky and Manion bill and it featured 15 songs with an emphasis on Springsteen's "Darkness on the Edge of Town" period along with nuggets like "Because the Night," "Pink Cadillac" and "Light of Day."

After several shows together over the years -- including multiple Light of Day festivals at the nearby Paramount Theater -- the Springsteen-Grushecky and the Houserockers pairing is a well-oiled machine. Springsteen and Grushecky seamlessly traded solos on "Never Be Enough Time" an the two traded lead vocals on "Chain Smoking." Manion, a member of the E Street Band who often plays with Grushecky, punched up the evening with his sax solos and his sax undertones on "Atlantic City" gave the song a rollicking Seeger Sessions feel.

Asbury Park's tiny Wonder Bar got an unannounced appearance from a very big guest on Saturday (7/18), Bruce Springsteen. The hometown hero showed up with Joe Grushecky, Eddie Manion and Grushecky's Houserockers for a 15-song set that a lucky few hundred people got to witness. If you weren't there, or just want to relive the memories, Gothamist points to a handful of fan-shot videos of the show. Watch those, and check out the setlist, below.