Phil Collins told Playboy in 1986, "I've always liked the idea of Springsteen - everyman's music for every-man, you know; it captures the imagina-tion of the workingman. Chuck Berry did the same thing. I don't know that much about Springsteen's older songs, but I like what he stands for. Born in the U.S.A. is just fantastic. It has great atmosphere and it's a great song." 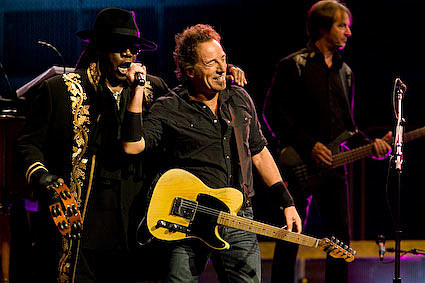 BRUCE SPRINGSTEEN AND THE E STREET BAND will perform in the BRIDGESTONE SUPER BOWL XLIII HALFTIME SHOW on NBC Sports at Raymond James Stadium in Tampa on Sunday, February 1, the NFL announced today.

The Super Bowl halftime show is annually the most-watched musical performance. More than 148 million viewers in the U.S. watched last year's show. The Super Bowl and halftime show will be broadcast worldwide in more than 230 countries and territories.

Bruce Springsteen and the E Street Band join an esteemed list of recent halftime acts that includes the Rolling Stones, U2, Paul McCartney, Prince and Tom Petty and the Heartbreakers. [The Boss]

Christina Aguilera, Enrique Iglesias, Toni Braxton, an 80-person choir and Phil Collins performed at the Superbowl in 2000. Sufjan Stevens and St Vincent performed a Phil Collins song this past Saturday night. Video of Bruce Springsteen and Axl Rose performing together below...