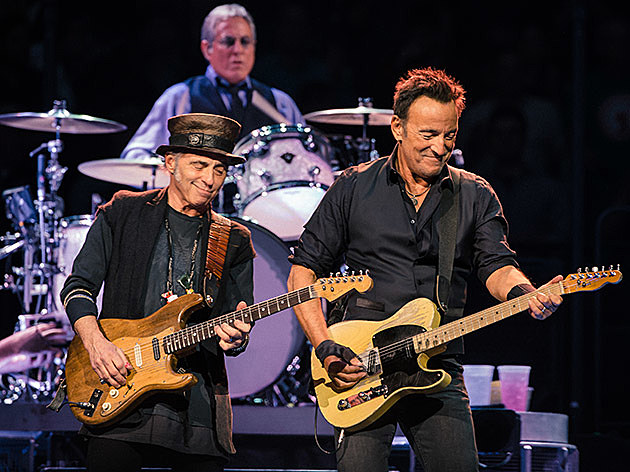 In the Human Rights Campaign's own words:

today, the Human Rights Campaign (HRC), the nation’s largest lesbian, gay, bisexual, and transgender (LGBT) civil rights organization, praised the news that Bruce Springsteen is cancelling a concert this weekend in North Carolina due to the state’s radical and extreme new anti-LGBT law – HB 2 – that was rammed through the legislature on March 23rd.

“Bruce Springsteen is a hero and an icon because he gives voice, both through his music and his advocacy, to those who struggle against injustice and equality,” said HRC President Chad Griffin. “It means so much that he has spoken out against this hateful bill on behalf of thousands of citizens whose rights and fundamental dignity are being trampled by the leadership of North Carolina.”

In announcing the decision, Springsteen said: “As you, my fans, know I’m scheduled to play in Greensboro, North Carolina this Sunday. As we also know, North Carolina has just passed HB2, which the media are referring to as the “bathroom” law. HB2 — known officially as the Public Facilities Privacy and Security Act — dictates which bathrooms transgender people are permitted to use. Just as important, the law also attacks the rights of LGBT citizens to sue when their human rights are violated in the workplace. No other group of North Carolinians faces such a burden. To my mind, it’s an attempt by people who cannot stand the progress our country has made in recognizing the human rights of all of our citizens to overturn that progress. Right now, there are many groups, businesses, and individuals in North Carolina working to oppose and overcome these negative developments. Taking all of this into account, I feel that this is a time for me and the band to show solidarity for those freedom fighters. As a result, and with deepest apologies to our dedicated fans in Greensboro, we have canceled our show scheduled for Sunday, April 10th. Some things are more important than a rock show and this fight against prejudice and bigotry — which is happening as I write — is one of them. It is the strongest means I have for raising my voice in opposition to those who continue to push us backwards instead of forwards.”

H.B. 2 has eliminated existing municipal non-discrimination protections for LGBT people and prevents such protections from being passed by cities in the future. The legislation also forces transgender students in public schools to use restrooms and other facilities inconsistent with their gender identity, putting 4.5 billion dollars in federal funding under Title IX at risk. It also compels the same type of discrimination against transgender people to take place in state buildings, including in public universities. Lawmakers passed the legislation in a hurried, single-day session, and Governor McCrory quickly signed it into law in the dead of night.

North Carolina has the unfortunate distinction of becoming the first state in the country to enact a law attacking transgender students, even after similar proposals were rejected across the country this year -- including a high-profile veto by the Republican Governor Dennis Daugaard of South Dakota. North Carolina school districts that comply with the law will now be in direct violation of Title IX, subjecting the school districts to massive liability and putting an estimated $4.5 billion of federal funding from the U.S. Department of Education, as well as funding received by schools from other federal agencies, at risk. This section of House Bill 2 offers costly supposed solutions to non-existent problems, and it forces schools to choose between complying with federal law -- plus doing the right thing for their students -- or complying with a state law that violates students’ civil rights. Read more about how this bill puts federal funding at risk here.

As a result of North Carolina’s HB2 law, which puts thousands of youth, citizens, employees, and visitors to the state at risk, more than 130 business leaders are calling for a repeal effort during the upcoming legislative session and a number of businesses have begun to remove investments from the state.

Bruce recently played Madison Square Garden in NYC, and also played MSG in January. The latter is where the above photo by P Squared was taken. More pics like it, HERE.