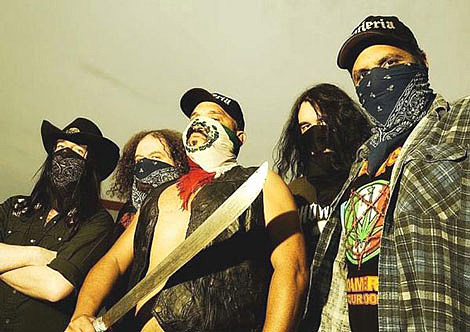 Brujeria is an extreme metal band formed in Mexico City, Mexico in 1989.. [and was] a side-project of founding member and former Fear Factory guitarist Dino Cazares [featuring] ...artists such as Billy Gould, Nicholas Barker, Raymond Herrera, Jeff Walker and Shane Embury. They perform under pseudonyms and portray themselves as a Latino band consisting of drug lords, concealing their identities due to being wanted by the FBI. Their lineup has changed over time and could be different at any point in time.

Brujeria will take time out of their busy schedule of hacking off limbs to play Webster Hall on 4/11 with Sr. Fuss and Pro-Fe-Cia. Tickets go on sale this Wed (1/27) at noon.

The band is currently streaming a newish song on their myspace, and according to Terrorizer, have their first album in 10 years on the way in 2010. Also according to their myspace, Dino Cazares has exited the band which leaves Brujeria 2010 looking like this:
Juan Brujo - Vocals
Fantasma (Pat Hoed) - Vocals, Bass
Hongo (Shane Embury of Napalm Death, Venomous Concept) - Guitar
Pinche Peach - Vocals & Samples
Podrido (Adrian Erlandsson of Paradise Lost, Skitsystem, The Haunted) - Drums
El Cynico (Jeffrey Walker of Carcass) - Bass
Pititis (Gaby Cominguez) - Backing vocals

Show flyer (it's their only date currently listed) and some videos are below...

Brujeria - Revolucion at With Full Force 2007 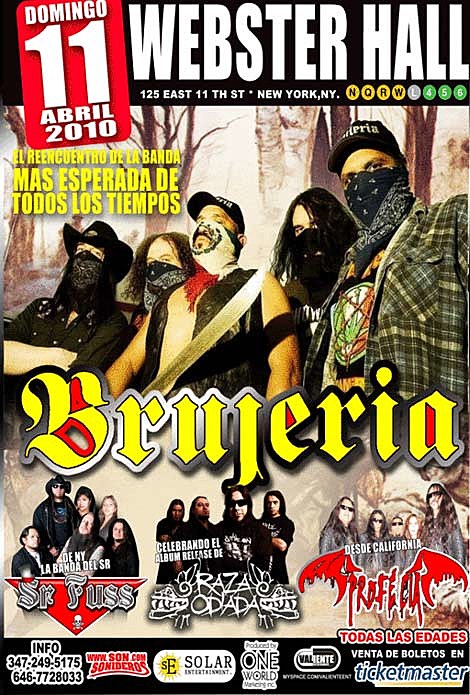