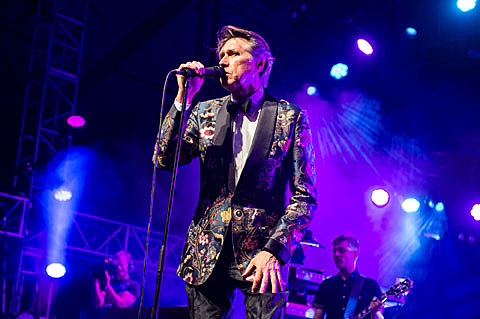 Onetime Roxy Music frontman and general suave dude Bryan Ferry just wrapped up appearances at Coachella 2014 and other spots in California. Named for a song from 1978's solo LP, The Bride Stripped Bare, the "Can't Let Go Tour" is heavy on Roxy material and cherry-picks favorites from his solo career as well. The West Coast dates have been well-received:

His band, as always, is loaded with younger aces who can fairly well replicate recorded versions, though they tend to rush tempos and aren't as dynamic at expanding frameworks the way the real Roxy could. But at 68, and allowing his gray to be seen more, Ferry is mostly intact. It's only noticeable how he avoids his upper range, particularly on wilder material like opening salvo "Re-Make/Re-Model" and roaring takes on "Virginia Plain" and "Editions of You" toward the end. Even on the disco thriller "Love Is the Drug," he leaves the high holler to his backing singers, forming a vocal meld as plush as it is distinctive.

"Hope you like the selections we have tonight from the various albums over the years," he said after "Ladytron," another Roxy debut-album favorite. And though plenty of fans have been griping about the hot temps in the balcony, who would complain about the set list? - [The OC Register]

You can check out the setlist from Ferry's 4/14 show at Oakland's Fox Theater below.

The "Can't Let Go Tour" will be making its way east this fall, including a stop in NYC at The Beacon Theatre on October 1 which is pretty much the perfect place to see a class act like Ferry. Tickets for the Beacon show go on sale Friday (4/25) at 10 AM, with AmEx, Chase and artist presales starting Wednesday at 10 AM. The artist presale password is "CountryLife". Maybe by that time he'll have worked up a rendition of his Todd Terje collaboration, "Jonny and Mary." If you haven't heard that you can stream it below.

All tour dates are listed, along with the Oakland setlist and a full Roxy Music concert from 1980, below...