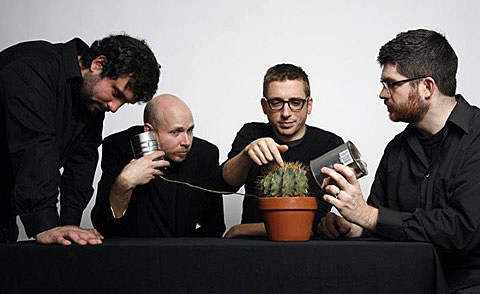 While best-known as guitarist in The National, Bryce Dessner is also a world-renowned composer as you might be aware. On that tip, he's curated a night at Gowanus Art+Production's Green House on September 25 featuring the So Percussion ensemble. The night includes a performance of Dessner's "Music for Wood and Strings" which he wrote specifically for So Percussion and which made its debut at Carnegie Hall last year. The night also features music by Steve Reich, and a work by Tristan Perich that includes a special appearance by the JACK Quartet. Tickets for the show are on sale now.

Dessner has also been working on a brand new orchestral composition to be premiered by the Los Angeles Philharmonic next May, as well as premiering his audiovisual collaborative work, Black Mountain Songs, in November at BAM's Next Wave Fest. Oh, and he's still working on that Grateful Dead tribute album with The National.

Meanwhile, So Percussion have other dates as well. They'll perform John Cage's "We Are All Going in Different Directions" at Bard College on September 21. Tickets for that show are on sale now. All dates are listed, along with a video of So Percussion performing with Dessner and Reich, below...

Sunday, September 21 - 3pm
The Fisher Center at Bard College
John Cage: "We Are All Going in Different Directions"
A celebration of Cage's legacy as part of our new "Branches" project at Bard