The National @ the Studio (more by David Andrako) 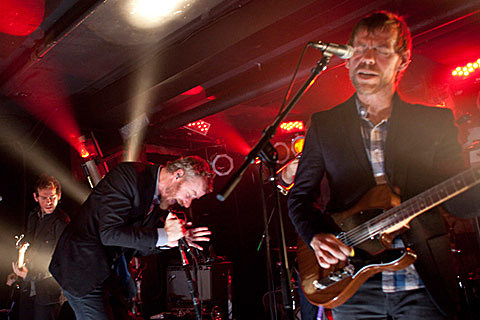 Not only did Bryce play a live MTV taping with the National last night, he's playing a fashion week party tonight (Wednesday) and three shows this weekend at St. Ann's Warehouse (Thursday-Saturday), AND he has an Ecstatic Music Festival show on Thursday night too...

Composer/Guitarist Bryce Dessner of The National is excited to premiere two separate compositions in New York City on Thursday, February 10. The first commission was awarded to Bryce by Bang on a Can All Stars' People's Commissioning Fund. The piece will be performed at Merkin Hall by Bang on a Can All-Stars (details HERE).

AND, the Bang on a Can show is one of at least two Ecstatic Music Festival shows Bryce is part of, and the St. Ann's show is one of two gigs Bryce has scheduled with the BYC kids. Bryce's other band Clogs teams up with the Brooklyn Youth Chorus and Shara Worden for a show at Merkin Concert Hall on May 12th. Shara Worden also plays Merkin Concert Hall four days later with Sarah Kirkland Snider (I think Shara was kept off the bills until after her recent Lincoln Center show). Tickets for those and other Ecstatic Music Fest shows are on sale.