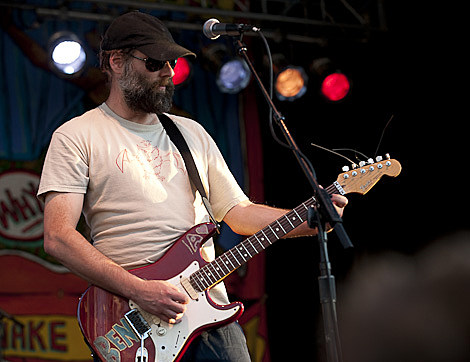 "Over the past 17 years of touring, Built to Spill have become as famous for their cover songs as for any of their own material, having paid homage live to acts as diverse as M.I.A., David Bowie, the Talking Heads, Neil Young, Macy Gray, Modest Mouse, Ozzy Osbourne and on and on. The band is so fond of playing other people's songs that according frontman Doug Martsch, "when we play a cover it's the highlight of the evening for me every single night."

But as one would imagine for a band that has built such a reputation, BTS take the art of the cover song very seriously. "We're like a real cover band when we do covers -- we try to do it straight up for the most part," Martsch tells Spinner. "We don't make a joke out of it. We're trying to convey how great that song was in the first place."" [Spinner]

Tickets are still on sale for the four upcoming NYC Built to Spill shows. That includes the two at Webster Hall, the two at Music Hall of Williamsburg, and two-day passes for each venue. Those previously-announced October shows are part of a much larger tour. All dates, and a few videos of BTS playing covers, below...

The Thermals cover Big Dipper by built to spill