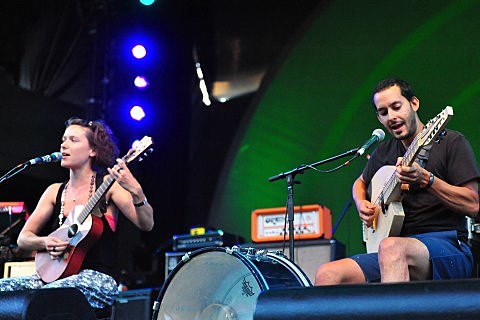 In their own words:

Your phonetic struggles are over! We know it's been hard on everyone trying to figure out the pronunciation of Buke and Gass. Is it bass like the fish, or bass the unusually funky instrument? Well, now there's no more subtly trailing off as you tell your friend about this great new band you love so much. ("Oh, you should really check out that band Buke and Guh-aa.....yeah, that one.") The band has decided to officially change their name to (insert drum roll here) Buke and Gase. Aron and Arone wrote their own explanation:

A limerick announcement addressing the mis-pronunciation of our name:

If there was one thing to replace
It would be the last S in Gass,
There isn't much class
When rhymed with sassafras,
So we changed it to E just in case.

With Love,
Buke and Gase

So, there you have it. We're busily updating lots of important looking file folders with the new name, and hopefully the internet won't take too long resolving itself to the change. (Bang, you are so damn fast, Mr. Internet.)

But wait, we have yet more announcements about Buke and Gase (née Gass). News flash #1: The band was recently nominated in the Best Art Vinyl 2011 contest, for their Riposte record! You still have time to vote for Aron and Arone, who created the cover themselves, both of their hands & with their hands. Cast a vote right here.

Finally, hopefully you're already aware that Buke and Gase have been tooling around Europe on tour! You have until December 14 to see them live so we suggest you take a look at the updated list of Buke and Gase shows here.

That is, AFTER you cast a vote in for the Best Art Vinyl. We're trying to be thorough here.

Want to make your own limerick about the name change? You can do so on Brassland's Facebook page. If they like yours best you win a pair of tickets to their January 12th New York Guitar Festival show. They're performing the score for Buster Keaton's The General with Lee Ranaldo, Kaki King, and Twi The Humble Feather. Thurston Moore, Nels Cline and many others are playing the Guitar Fest too. Most updated lineup HERE.