Dominick Fernow at Public Assembly in 2011 (more by Louis Caldarola) 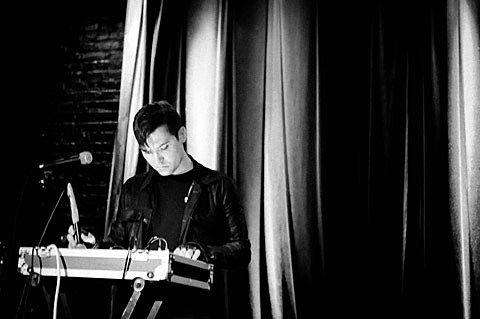 NYC party The Bunker is celebrating its tenth anniversary this week on Friday (1/4) at Public Assembly, where they've been throwing their parties for the last 5+ years. The party will take place in both Public Assembly rooms with all four Bunker resident DJs (Derek Plaslaiko, Bryan Kasenic, Mike Servito, and Eric Cloutier), in addition to Reagenz aka Move D (live), Spacetime Continuum, Silent Servant, and Vatican Shadow (live). Tickets for the party are on sale now.

Vatican Shadow (aka Dominick Fernow, formerly of Cold Cave, and also the brains behind Prurient) released the album, Ghosts of Chechnya, back in October via Hospital Productions. You can stream the track "Chechnya's Ghosts Loom Large in Death of Former Spy" from that album below.