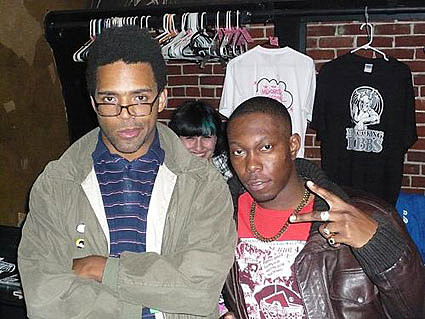 Last time I saw Busdriver, he was second on a bill that included Kidz In The Hall, El-P (with Aesop Rock), and Dizzee Rascal. Next week, the abstract rhymer will lace a pair of shows both as support (at the sold-out Bowery Ballroom with Flobots on 8/5), and as headliner (at Union Hall in Brooklyn on 8/6, tickets are on sale). The Brooklyn show is also the afterparty for Union Hall's night 'at the bridge'.

West-coast cratediggers People Under The Stairs are also on that Flobots bill and have lined up a headlining show of their own on 8/6, at Southpaw with Iller Than Theirs and Junk Science. Tickets are still available. All dates below...

Thes One of PUTS rockin' on his MPC60