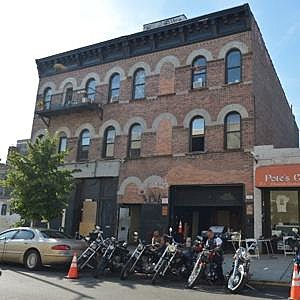 Last year, five Queens cops were hurt trying to stop an onslaught by gang members who attacked them with brass knuckles, knives and a baseball bat, court papers state.

Even Bushwick's hipsters ran afoul of the Forbidden Ones, who had a clubhouse on the ground floor of a three-story loft building at 15 Thames St.

"My roommates said they got assaulted by members of the biker gang," said Wendy Scher, a 33-year-old resident of the building. "Two of them won't come back because they're afraid."

But other residents got a kick out of the outlaws.

But even the most free-spirited bohemian might have been uneasy to know that a two-wheeled cannon was loaded and aimed at the front door of the Forbidden Ones' lair, ready to fire at infiltrators, according to the prosecutor.

"The defendants wear the 'patch' to make it known that they are 'outlaws' who reject mainstream society and live outside the law," wrote Assistant Brooklyn U.S. Attorney Celia Cohen. [Daily News]

Does anyone else here party with them all the time?