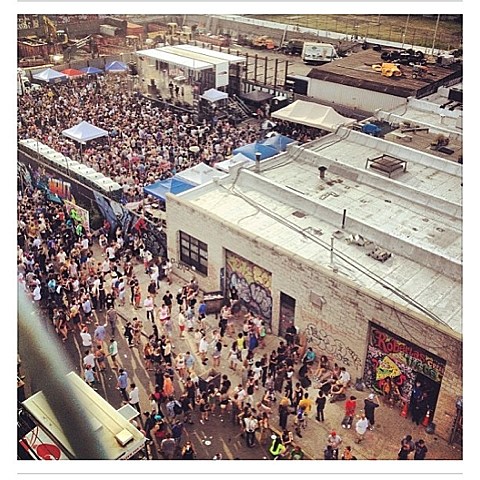 The Bushwick Block Party, presented by Roberta's, returned to multiple stages on Moore Street this past Saturday (7/27) with sets from Action Bronson, World's Fair, Pictureplane, and more. It was definitely quite the scene, with tons of people lining up to get into the packed event, which actually ended up being shut down early by cops. It wasn't shut down before Action Bronson or World's Fair got to play (video from Bronson's set below), or before Pictureplane, but Pictureplane was moved to a different stage due to complaining neighbors. The whole thing caused some angry comments on the party's facebook event page about blocking sidewalks, and making people wait in line. On the brighter side, those who did get in looked like they were having a great time, and there was tons of food and drinks going around throughout the day.

That Action Bronson video, an instagram video showing an aerial view of the party, and one of people double dutching, below...