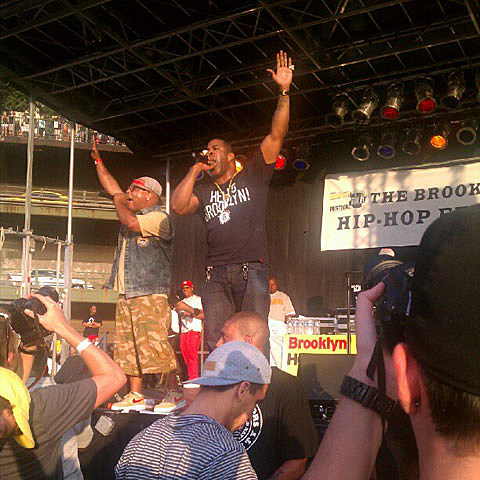 Busta Rhymes headlined the closing night of the Brooklyn Hip Hop Festival on Saturday (7/14) with a set which saw him reunited with Leaders of the New School -- the group which launched his career -- marking the first time Busta's performed with them since the mid-'90s (despite the group reuniting without him back in 2010). Though it had been hinted at, Raekwon and Rakim did not appear as guests at the show, but A Tribe Called Quest members Q-Tip and Phife Dawg, among others, did show up.

HipHopDX was at the show, and here's what they had to say about it:

With Spliff Star by his side, Bussa Bus rattled through a gaggle of hits from his illustrious, 20-plus year career - including anthems "Woo Ha!," "Pass The Courvoisier," "Party Goin' On Over Here," "Look At Me Now," "Everybody Rise," and others. The Brooklyn-native also brought Lil Fame and Slick Rick to the stage for performances of "Ante Up Remix" and "Children's Story," respectively, as well as Reek Da Villain, and BHF regulars, Buckshot and Smif-N-Wessun of Boot Camp Clik. In a classy display of skill, Busta Rhymes continued leading the audience in his rendition of "Put Your Hands Where My Eyes Can See" even after the sound was cut because the show went past the park's 8PM curfew. Those in attendance loved it, waving their hands to Rhymes impromptu, pantomime performance, leaving on an upbeat note despite a day of noticeable challenges.

A NewYorkMusicNews video, which you can watch below, reports that Busta's set was cut off due to time constraints and though they turned off his mic, he stayed on stage and got the crowd swaying their arms and cheering. The video's also got a clip of Busta doing one of those mile-a-minute freestyles that he does so well.

Speaking of turning off mics, and as a lot of the internet is reporting, the same thing happened to Bruce Springsteen, Paul McCartney, and Tom Morello in London this weekend.

"Bruce Springsteen had been waiting for this moment for a long time. "I gotta tell you," he said to the 76,000-strong crowd, "I've been trying to do this for 50 years." For the finale of his headline slot in London's Hyde Park on Saturday, he'd arranged a very special treat: An onstage collaboration with Beatles legend Paul McCartney. But the rock megastar hadn't banked on the local London council deciding to show him who was boss." [CNN]

You can catch Q-Tip again this Friday (7/20) at Irving Plaza where he'll be djing the second edition of his "Offline" party, but note: "There will be a strict door policy. No single guys will be admitted unless there are ladies in your group. Dress To Impress. We love style and we know you do too, so please dress smart. Management reserves the right to refuse admission." Sounds fun.