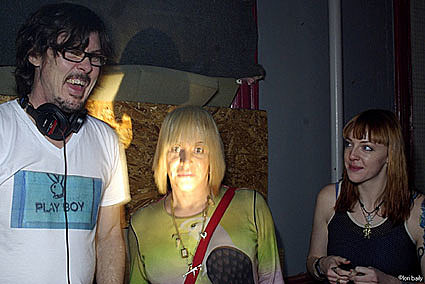 I'm not at a computer where I can upload any pictures right now, so this post will be limited, but I just thought I'd say something about the Butthole Surfers show that ended less than an hour ago here at Webster Hall in NYC (July 29, 2008).

After playing for almost an hour and a half, Gibby Haynes got mad at the sound guy who was on the side of the stage - something about not turning up the monitors. I don't know his name, but the sound guy was one of the Bowery Presents regulars. Gibby walked over and punched him and/or threw a bottle at him. Next thing you know security escorts Gibby off the stage mid-song. Nobody really knew what was going on. The band continued to play for at least one more song, and then left in a proper manner with lots of applause and high fives to the front row. Everyone started going crazy (in a good and drunken way), demanding an encore. It's not often you hear the crowd actually scream for a band to come back. We're all so spoiled. We just assume they always will. Of course there was the confusion about the way Gibby made his exit, and that was probably why people were chanting "Gibby" even louder and longer than usual.

The only people who came back to the stage though, were big security guards, and the occasional School of Rock kid to clean up some gear. Then all of a sudden Genesis P-Orridge saunters on stage and strangely had people shouting louder, but was also telling people to be silent. Security then pulled Genesis off the stage and more and more security filled it up. Finally the video guy came back to grab his laptop and turn off the projections (which by the way had still been running along with background music that whole time). The lights were also still off. I was close to the video guy and he was one who told me the show was over because Gibby got arrested. I guess he won't be DJing at the afterparty.

update: some in the comments say he wasn't actually arrested, just kicked out.

Lots of cups were hurled at the stage. One security guard manhandled a kid who jumped on stage to get a selist during the commotion. Otherwise, a riot was avoided and everyone (including lots of very drunk people) (especially the guy from Texas) soon exited pretty orderly and peacefully. Awesome show (I hope the sound guy is okay and Gibby doesn't spend too much time in jail).