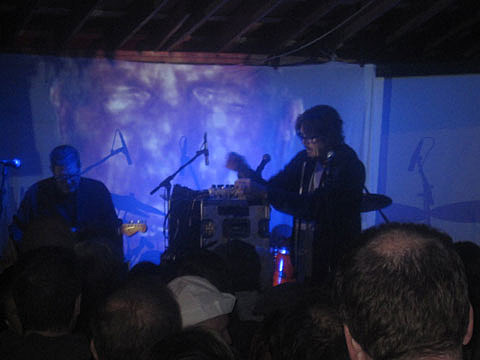 "The idea of Butthole Surfers performing Locust Abortion Technician in its entirety was a curious one, I thought, when I first saw the announcement. I listened to the album carefully and wondered how they were going to pull it off with all that electronica and distortion and sampling and mixing, without it seeming like they were just playing a recording. Few of the songs are melodic tunes that are probably easier to recreate in a live show. It's a great album, but I just had trouble picturing it. It could have been a disaster if they hadn't prepared so well. And prepare they did. It was clear how hard they were working up there to pull off the performance, professionally and technically, and I for one truly appreciated the effort they made.

Turns out that playing this album was a genius idea, executed perfectly. It was clear that not only had they been rehearsing, but they orchestrated the songs with a fresh spin. They played the entire album in one long, continuous exhale that gave a shape to the over-arching themes of the music in a way that isn't immediately apparent when you listen to the album." [Gibby n Me]

Butthole Surfers played two shows at The Scoot Inn in their official hometown in late October. October 29th's Austin show was advertised as "1st set - Locust Abortion Technician; 2nd set - everything else", and then they played on Halloween with Meat Puppets.

Now it's NYC's turn. And though there's no word on whether they'll perform an album, Butthole Surfers will play two holiday shows at one Brooklyn venue. Tickets go on sale Tuesday, 11/23, at noon for December 30th at Music Hall of Williamsburg ($35), and December 31st (New Years Eve) ($55). Openers TBA.

Meanwhile go check out some art by Brooklyn resident Gibby Haynes at Kidd Yellin in Red Hook (not far from where he currently resides).

Videos from Austin below...

HUMAN CANNONBALL (only the first minute)

AND ANOTHER RECORDING OF THE O-MEN