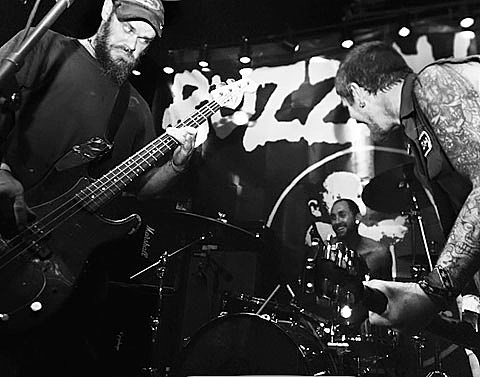 Hydra Head has a helluva release schedule this week! Besides crucial represses of Neurosis's Sovereign, Discordance Axis's The Inalienable Dreamless, Oxbow's King Of The Jews, and new releases from Clouds (from the grave!) and Prurient, the label also released the long awaited LP from Buzzoven and the new Gridlink!

Now with 100% more Teddy Patterson, grindcore all-star team Gridlink's Orphan is out now. Download "Dar Al-Harb" from the new LP above, stream it below. Gridlink has also revisited their crushing (and BV fave) Amber Grey LP and added some serious low-end in the form of the Human Remains/Burnt By The Sun bass killer. Both Orphan and Amber Grey are packaged in a single slab of vicious vinyl, available now via the Hydra Head store. Helmet optional.

Sludge sickos Buzzoven's long shelved Revelation: Sick Again LP is FINALLY out on vinyl and CD. The release has been a decade in the making (!) and has been bootlegged countless times, but finally is here. Buzzoven fans, grab a fifth of Robo and rejoice... check out the "new" song "Lose" available for download above/streaming below and order a copy via Hydra Head.