Some of you probably know Wes. He's a regular commenter on this site. He runs his own blog. He's in a band. He promotes other bands, and when he's not "working," he's out watching & supporting other bands. Since he's got so much going on, I asked if he'd like to do an(other) interview. He agreed. 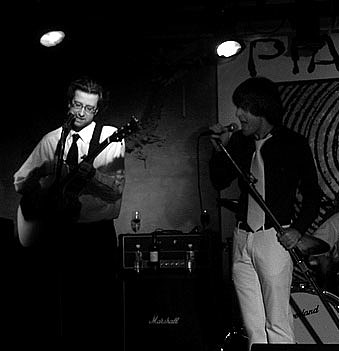 brooklynvegan: Hey Wes. Readers of my last inverview with you already know you throw free weekly singer-songwriter mashup sessions in NYC. They might not realize that you also make your own music. Your band is called the Undisputed Heavyweights, and your URL (betterthanelvis.com) claims you're better than Elvis. Can you tell us about that?

wes: First of all, we don't claim it as much as we prove it each show. But that's semantics perhaps. The band got it's start a little over a year ago when I met a great singer-songwriter called Casey Shea at an open mic. We chatted for a bit and started writing this song in the back kind of spontaneously. Then this drunk guy started bothering us and he got a little aggressive and we ended up in a full fledged bar-fight with pool cues and beer bottles and everything. Casey got cut pretty badly and I accompanied him to the hospital for his stitches (he was totally fine, just looked bad) and we decided that this kind of first meeting bonding experience was obviously a sign from God to form a band together.

We then also invited our mutual friend and singer-songwriter Jeff Jacobson to join and form the original trinity. We added bass and drums a few months later after a series of acoustic shows when the buzz had driven us to bigger rooms where that kind of sound was necessary.

brooklynvegan: Like for your Pianos residency? How did that go by the way?

wes: The residency went really well. We had a lot of fun, great opening bands, the crowd really seemed to dig and kept getting bigger each week with lots of new faces. We went through about 300 2 song promo discs we did for those 4 shows with Alloy Radio so that was exciting.

brooklynvegan: Who were some of those great opening bands?

wes: Derek James was probably my favorite, Granian was great too, and they didn't open for us but we shared a bill with the lovely Au Revoir Simone one of those nights and they were great. The last Friday we had a great bill with the Twenty Twos (Epic), Jaymay and Cock Lorge

brooklynvegan: Speaking of Jaymay, I realize you and she had a business relationship at one time. I'm referring to "Liberated Matter." Is that your own record label?

wes: We originally started organizing acoustic shows in the East Village and Philadelphia and then expanded our activities to bigger shows, booking, management and releasing a few Jaymay projects. I wouldn't call it a full fledged label at that point, but right now we're working on going in that direction. In the first quarter of 2006 we hope to unveil an exciting roster with small family of 4 to 6 artists we really believe in.

brooklynvegan: Awesome. Keep us posted as it develops, and thanks for talking. Any last words?

wes: Maybe just that I'm very excited about the state of music today and the direction in which I believe it to be moving in the near future. Great stuff is coming to the surface in a wonderfully organic way. Listener and artist driven.