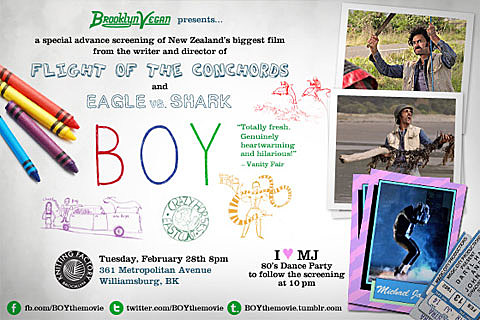 The Year is 1984, and on the rural East Coast of New Zealand "Thriller" is changing kids' lives. Inspired by the Oscar nominated Two Cars, One Night, BOY is the hilarious and heartfelt coming-of-age tale about heroes, magic, and Michael Jackson. BOY is a dreamer who loves Michael Jackson. He lives with his brother ROCKY, a tribe of deserted cousins and his Nan. Boy's other hero, his father, ALAMEIN, is the subject of Boy's fantasies, and he imagines him as a deep sea diver, war hero and a close relation of Michael Jackson (he can even dance like him). In reality he's "in the can for robbery". When Alamein returns home after 7 years away, Boy is forced to confront the man he thought he remembered, find his own potential and learn to get along without the hero he had been hoping for.

BOY was written and directed by Oscar nominee Taika Waititi (Flight of the Conchords, Eagle vs Shark) who also stars in the film. It premiered at the Sundance Film Festival in January 2010, where it was nominated for the Grand Jury Prize. It since has done really well in New Zealand, where it was released to much acclaim. It will get an American release on March 2, but you'll be able to see it a bit sooner than that.

BrooklynVegan is proud to present a free screening of BOY at Knitting Factory in Brooklyn on Tuesday, February 28. The movie starts at 8 PM and will be followed by a Michael Jackson dance party in the front bar at 10 PM.

Like our 2010 screening of Exit Through the Gift Shop and our 2011 screening of Senna, Knitting Factory will be filled with chairs and the screening is first come, first served.

Taika Waititi is also funding the American release of the film on Kickstarter. As of this post, there's 8 days to go and the $90,000 is just under halfway met.

Watch the film trailer below...