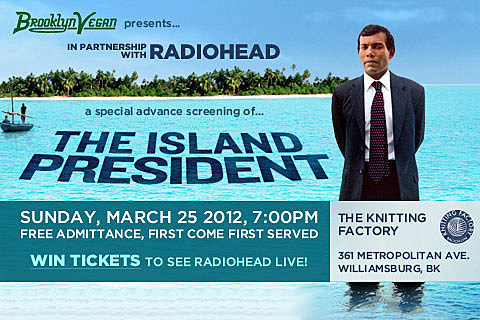 Says Thom Yorke: "'The Island President' is a film about the Maldives, and the struggle of President Nasheed to get the voice of a small nation heard in the climate change debate. Unless something is done to stop rising sea levels they will lose everything. The country will be under water. Some of our music was used to help tell the story."

Radiohead contributed 14 songs to the film, about which you could also say:

"The Island President" is the story of the Maldives' bad-ass president, Mohamed Nasheed, and his fight against global warming. His tiny island nation is on the brink of demise -- rising sea levels will certainly swallow up the entire country, and along with it, every last person and vestige of their civilization -- in the foreseeable future. (Keep in mind Manhattan is also a low-lying area surrounded by water. This issue is not exclusive to the Maldives; they are only the first casualty.)

Unfortunately, last month, on February 7, Mohamed Nasheed, the democratically-elected president of the Maldives, was forced to resign in a coup d'etat orchestrated by the military and forces loyal to the former dictator. He continues to fight the good fight for the democracy and survival of his people though. Learn more by watching the film.

The movie opens in theaters on Wednesday, March 28, but you're invited to a special BrooklynVegan advance screening at Knitting Factory in Brooklyn on Sunday, March 25th. Like our previous free screenings of "Boy", "Senna" and "Exit Through the Gift Shop", this one is first come, first served, and seated.

Unlike at our previous screenings, at this one we're giving away two pair of Radiohead tickets! Details on how to win, and the movie trailer, below...

Tweet something with hashtag #Radioheadtix that also includes @BrooklynVegan AND @TheIslandPres. We'll pick a winner at random and contact them with more details. Good luck!

HOW TO WIN AT THE SHOW

First of all, you'll need to be at the Island President screening in Brooklyn to enter this one because we'll pick the winner in person and award them on the spot. To enter, with hashtag #Radioheadtix that also includes @BrooklynVegan AND @TheIslandPres. , OR "Like" BrooklynVegan on Facebook - https://www.facebook.com/BrooklynVegan and "Join" The Island President Screening Event Page. Again, you need to be there at Knitting Factory in person AND follow these instructions to win this pair. See you there!
--