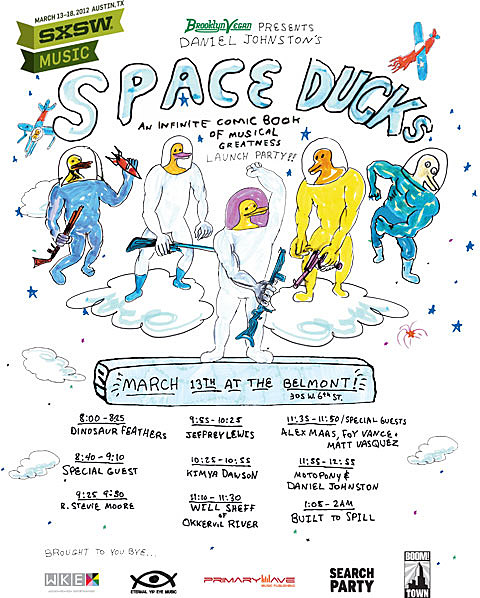 click HERE for a bigger version of the above flyer.

Hinted at and posted in some form on SXSW's website recently, but now offically announced... BrooklynVegan had the honor of helping put together what will be a very special show happening this Tuesday, March 13, 2012 in Austin as part of SXSW at the Belmont in honor of muiti-talented artist Daniel Johnston's very first comic book "Space Ducks", or more specifically to help celebrate the release of the FREE iPad app version that is coming first, new Daniel Johnston songs and tributes to him included. Read more about the forthcoming app and partially-Kickstarter funded graphic novel, which you can PRE-ORDER NOW, at the end of this post.

The party, big flyer HERE, is open to all SXSW badgeholders. Get there early for drink specials courtesy of Original Moonshine, Tecate and Republic Tequilia, and to experience the entire night of special sets. There will be Daniel Johnston covers and tributes throughout, with co-headlining performances by Daniel Johnston and Built to Spill. It will go like this:

Doors close at 2am.

Learn more about Space Ducks, and others who had a hand in this all, below... 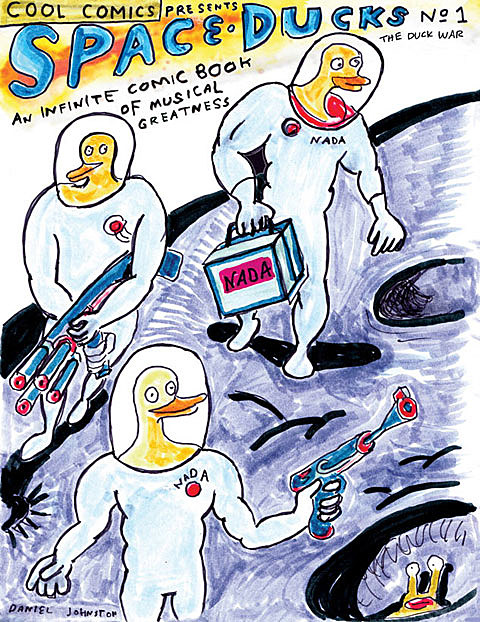 A celebrated musician and recording artist with a 30-year career that includes over 20 albums -- including covers by Death Cab for Cutie, The Flaming Lips, Tom Waits, Beck, and TV on the Radio -- Johnston was the subject of the 2006 documentary "The Devil and Daniel Johnston" which won the Sundance Film Festival Director's Award. His drawings and paintings have hung in art galleries and museums across the world, including the Whitney Museum of American Art. Johnston rocketed to global notoriety in the early 1990s when album artwork from his "Hi, How Are You?" record was featured on a t-shirt worn by Kurt Cobain at the height of Nirvana's exploding popularity.

SPACE DUCKS: AN INFINITE COMIC BOOK OF MUSICAL GREATNESS is Johnston's debut graphic novel. Johnston, a long-time and dedicated fan of comic books, realizes his life-long dream of being a comic book artist with this release.

SPACE DUCKS is more than just a graphic novel, it's a one-of-a-kind interactive comic book experience, complimented by the Space Ducks album and iOS App. The companion app will virtually take readers through Daniel's Outer-Space world of Ducks and Devils, with games to play, surprising voices from different talents, animations and videos from the comic book, links to exciting new Space Ducks merchandise, and a slew of Easter eggs, including contributions from some of the critically-acclaimed musicians who number amongst Daniel's biggest fans. The app will also debut Daniel Johnston's first new album since 2009.

On March 13th, in Austin Texas, SPACE DUCKS launches at SXSW with a show and invite-only, launch party, including headliners Built to Spill, along with Daniel Johnston and many more.

"This is another instance of bringing it all back home for me personally because I'm a native of San Antonio and went to school in Austin," says Ross Richie, Founder and Chief Executive Officer of BOOM! Studios. "Daniel is a fixture of the central Texas music scene and an international symbol of the unique creativity the region offers. Getting a chance to work with a seminal voice like Daniel is exactly why I got into publishing in the first place."

SPACE DUCKS follows a banner first year of publishing for BOOM! Studios' lit comix imprint, BOOM! Town, which saw Shannon Wheeler win an Eisner Award for his work I THOUGHT YOU WOULD BE FUNNIER. BOOM! Studios is enjoying back-to-back "Best Publisher" awards from Diamond Comic Distributors for 2009 and 2010.

SPACE DUCKS: AN INFINITE COMIC BOOK OF MUSICAL GREATNESS, written and drawn by Daniel Johnston, will ship this April. This title features 96 pages of story and carries a price point of $19.99 and a Diamond code of FEB120868.

See you in Austin!