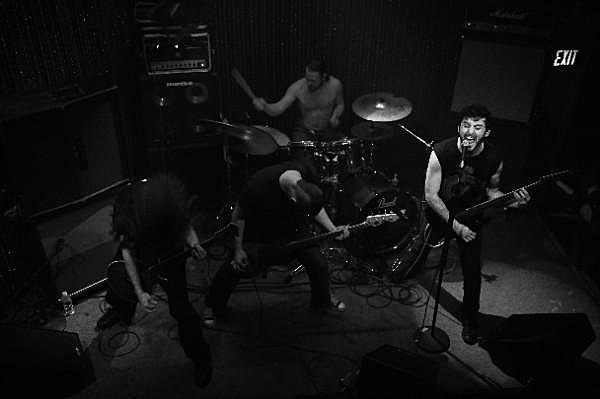 As if Burnt By The Sun, Tombs, Black Anvil, and Bloodhorse at Cake Shop (10/2) wasn't enough, now you can look forward to a SECOND helping of heaviness on the first weekend in October! Just two nights after the Cake Shop is set ablaze, storm clouds will roll into town as BrooklynVegan is proud to present Woe, Aluk Todolo, Malkuth, and Castevet at Union Pool on 10/4! $8 gets you in the door.

Woe's smashing LP, A Spell For The Death of Man, recently saw a vinyl release and is currently available for pay-what-you-want download.

Frenchmen Aluk Todolo dabble in a hybrid of black metal and krautrock (seriously!), and feature members of Diamatregon. Their new album Finsternis is out NOW, pick that up at Aquarius Records, who called it "a slow shifting otherworld defined by This Heat, Geronimo, Laddio Bolocko, Can, [and] Faust". The Union Pool show is part of a short US tour that also includes a few other NYC dates including Music Hall of Williamsburg with Faust on 10/1 (part of the WFMU Festival). All dates below.

Malkuth and Castevet both played shows this past weekend: Malkuth at Lit Lounge with Dark Castle, Orphan, and The Body, Castevet at Show No Mercy on 9/6 with Gnaw, Mick Barr, and Period. Pic sets from those shows are on the way.

A Woe video and the show flyer are with the dates below...